A Double Dose of Chicken Soup 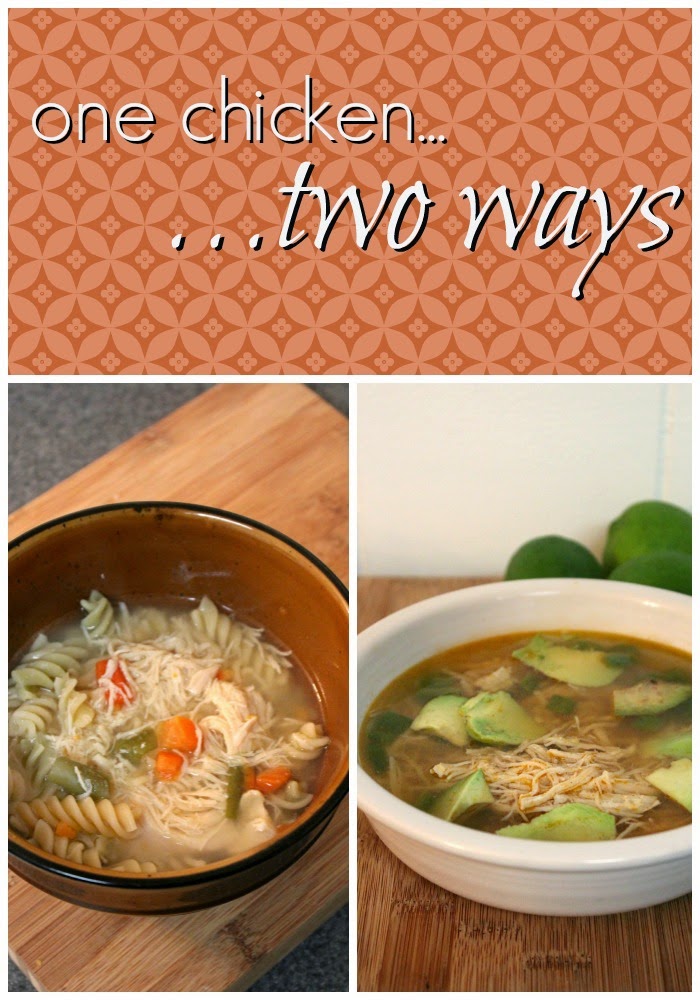 I don't know about you guys, but I am so ready for winter to be over! I'm tired of being cold.  I'm tired of my daughter catching every single bug that's been going around.  I'm ready for spring and warm weather.

But, alas, my wishing is for not.  It looks like Alabama will be getting another batch of winter weather later this week.  With cold temperatures approaching and germs on the war path, I know just what my family needs: chicken soup.

Both of these soups started with the exact same base: chicken and broth.  I put two huge chicken breasts (that I got for $1.77/lb at Aldi!!) into the crockpot with 8 cups of chicken broth seasoned with extra garlic powder, onion powder, salt, and pepper.  I cooked the chicken on high for 5 hours.  If you don't want to use the crockpot, you can easily do this on the stove by allowing the chicken to simmer for 20 minutes or so. I just prefer the ease of the crockpot; plus it makes my whole house smells good!

Once the chicken was finished cooking, I removed the breasts from the broth and divided the broth between two pots.  The first soup I made was the chicken noodle. 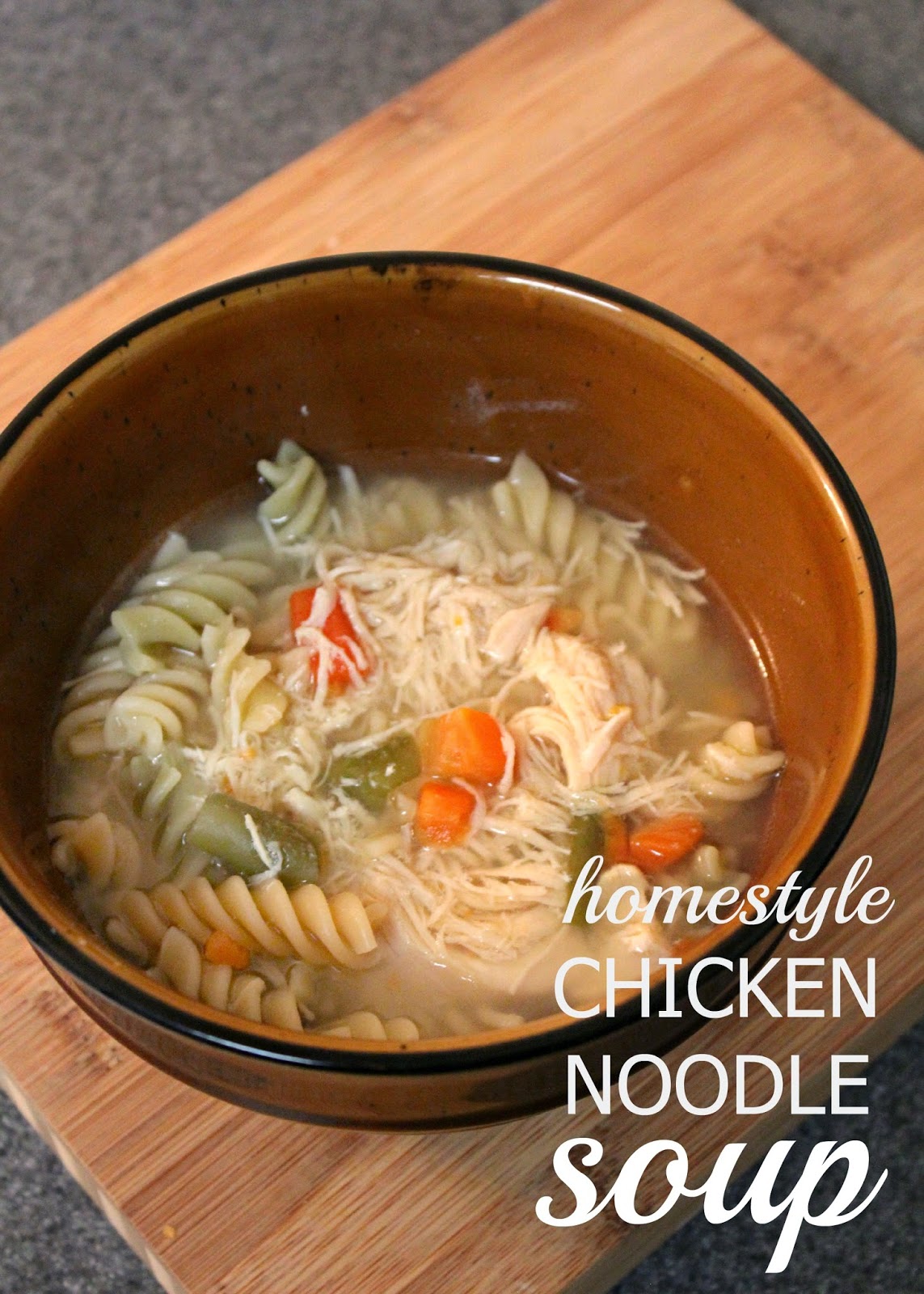 Directions
Bring chicken broth to a boil.  Add noodles.  Cook al dente.  Add  veggies.  Allow to simmer until the noodles finish cooking and the veggies are hot and flavorful.  Stir in the chicken.  Simmer until chicken is hot.  Season to taste. Serve.

That could not be any simpler.  It took all of fifteen minutes because the chicken was good beforehand.  My husband was thrilled to have some home-cooked chicken noodle soup to warm up with!

Now for my soup!

I saw an idea for this soup on Instagram.  Chicken, avacado, lime... It immediately called my name! I spiced it up a bit with some jalapenos to give it some kick and make it my own.  It came together with almost as little effort as the chicken noodle. 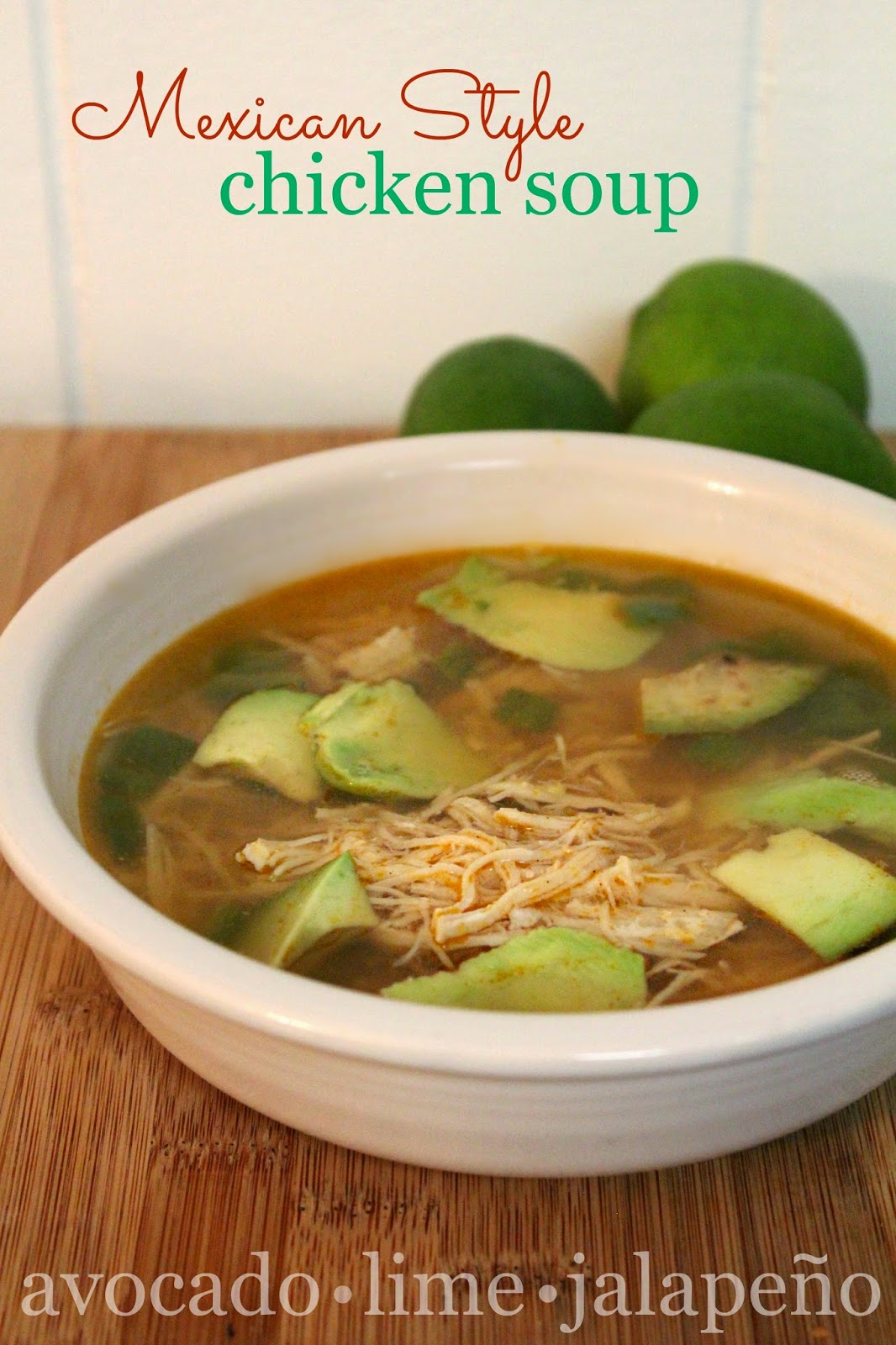 Directions
Bring chicken broth to a boil.  While the broth is heating, sautee the jalapeno in olive oil with a sprinkling of garlic powder and onion powder.  Once the broth is boiling, add the jalapeno and taco seasoning.  Reduce heat to a simmer.  Add the juice of one lime into the pot.  Add in the chicken.  Simmer until flavors combine and the chicken is hot.  Ladle into soup bowls.  Cube the avocado half and place it in the soup.  Top with a dollop of sour cream if you want.  Serve.

Let me just tell you, I make soup probably once a week.  This one is a definite favorite! The spicy jalapeno, the citrus of the lime, the creamy texture of the avocado... Absolute perfection.  And, of course, it's low carb.

I dare the germs to try to invade us after we loaded up on these soups! And while I am still most assuredly sick of the winter, I guess still having a reason to make soup makes it a little more bearable!