During my husband's last semester of college (during his student teaching), we lived off of my part time, private school teacher salary.  Wow... those were some lean months, but we made it through together and came out stronger than ever.  During that time, I became a master at improvising dinners.  After all, there are only so many times a person can eat Ramen noodles.

I invented the "broke college student's" stroganhoff, made from, you guessed it, RAMEN NOODLES!

Ramen is the standard food of a college student because it is so darn cheap. Using inexpensive ingredients, I doctored it up and created something that is the definition of "accidentally wonderful."


Ingredients:
2 pkgs Chicken Flavored Ramen Noodles
1 lb ground turkey (it's almost as cheap as beef, but way healthier)
1 can cream of mushroom soup
A heaping spoonful (each) of cream cheese and sour cream
Seasonings (to taste)
Splash of milk (about two ounces)

Directions:
Crush noodles in the pouch.  Remove the seasoning packets and set aside.  Boil noodles according to package directions, but do not add the seasoning.
While the noodles are boiling, brown the ground turkey and season it with the ramen seasoning.  Drain and return to skillet.
Pour the can of cream of mushroom and the splash of milk in the skillet with the turkey. Heat over medium-high heat until simmering. Allow to simmer for 2-3 minutes.
Reduce heat and add heaping spoonfuls of cream cheese and sour cream.  Stir in completely.
Drain noodles and add to the skillet.
Season to taste and enjoy! 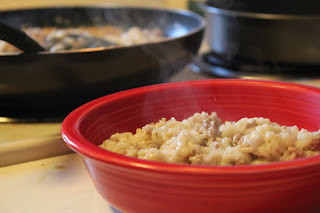