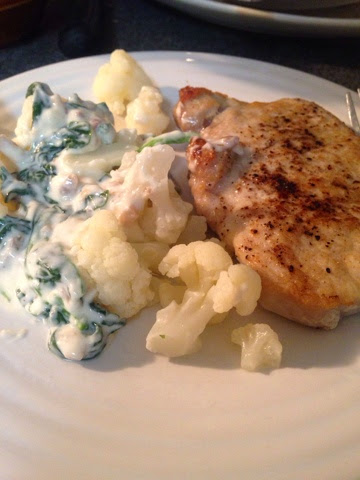 The best part about doing low carb is that most sauces are already low carb. Unfortunately, low carb doesn't necessarily mean healthy. My favorite, Alfredo, is still really bad for you. Heavy cream, tons of butter... Not so good. And while it's relatively low in carbs, I knew I could make it better.
I wanted to make a sauce that had some nutrition with it, too. Spinach is so good for you. And I love the flavor. I sautéed 4 cups of spinach and a half a can of mushrooms in a drizzle of olive oil with garlic powder and some bacon bits for a smoky flavor. 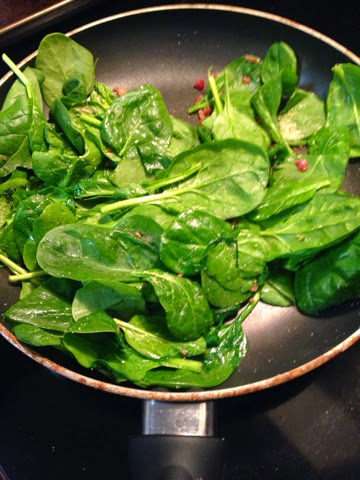 Once the spinach had wilted, I reduced the heat to medium low. I added 1/4 c light mayo, 1/2 c reduced fat mozzarella, and 1/2 c unsweetened almond milk. If it's too thick, add another splash of almond milk. I added salt, pepper, and garlic powder to taste. I also added a dash of nutmeg. The nutty flavor pairs perfectly with the cheese. You really can't taste a lot of nutmeg. It just enhances the flavor. 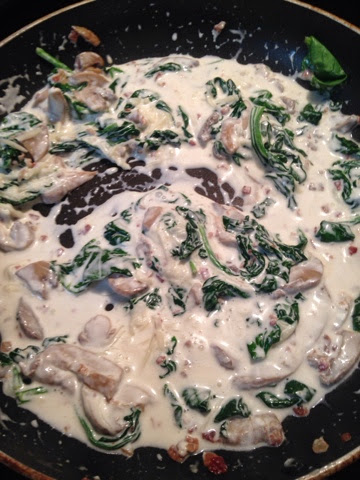 Now, if I had put this over noodles, it would have defeated the purpose of making it. Instead, I put it over cauliflower. That's really become my go-to carb replacement. It's so versatile!
I took this to work today for lunch with meatballs. Here's the carb breakdown. 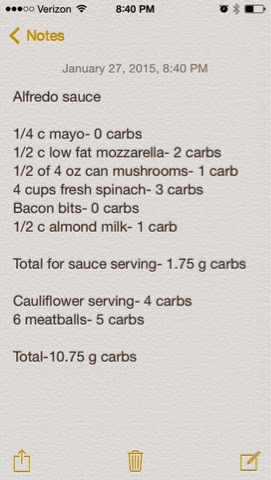 The sauce made enough for 4 servings bringing it's carb total to less than 2 carbs per serving! Add that to the cauliflower and meatballs, and you're still at Jjst under 11 carbs for a full serving! I'll take that! And most of the carbs came from the veggies, and like my college roommate says, "Jesus made those carbs, so they don't count!"
For dinner last night, I served it with pork chops. All I did to make the chops was brown them on the stove with salt and pepper and finish them off in the oven (350 for 20 min).
I like this sauce better than anything that comes in a jar! It's so easy and delicious; I'll definitely be making this again!
If I can keep it away from a certain someone, that is! 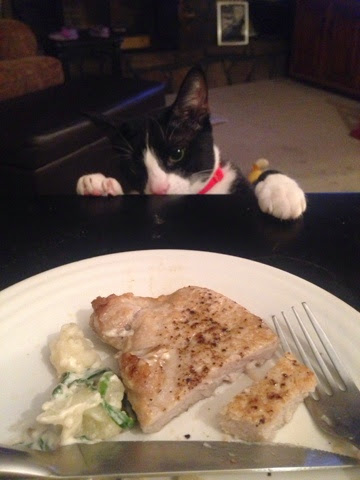