Grace part One- Grace for Others

Last week at my church, we kicked out all the men.

Last Sunday night was Ladies' Church- a service lead by women with a message just for women. My friend Candace and I lead worship, singing "Wonderful, so wonderful, is your unfailing love" and asking the Lord to "Teach me some melodious sonnet sung by flaming tongues above." My friend Shelley gave a powerful testimony- one I could relate to on so many levels.

In her message, she asked a question: What is it that women desire most?

I could answer that in a variety of ways.

As a woman, as a wife, as a mom... I feel so much pressure to be the best and do the best. I want to make my family organic, home-cooked meals every night in my spotless, farmhouse-style kitchen (curse you, Joanna Gaines) while my well-dressed husband and child look upon me with love and breathless wonder: "How did we end up with the best wife/mommy in the world?" they ask themselves.

In reality, I am likely throwing hamburger meat in a skillet for Hamburger Helper while my husband catches up on dishes from the night before and my daughter entertains herself playing Starfall on the iPad (Hey, at least it's educational!).

I am a perfectionist. An "over-achieving perfectionist," according to a certain former employer, whom I'm not sure meant it as a compliment. What that means, for me, is that I rarely feel like I do enough. My house is not clean enough. My husband and daughter are not served enough. My anything and everything is just not enough.

And there are plenty of women on in real life or on social media who reinforce those feelings. I once posted a photo of my daughter's lunch on Instagram: a grilled cheese sandwich made with Kraft American cheese. I posted it as a joke because I had been on a low carb diet. A woman thought it necessary to comment berating me about my use of processed foods in my child's diet. Apparently, I was ruining her from her ever wanting to eat "real food." And "Don't you know how many poisons you are deliberately putting in her body?"

Ashamedly, I know I'm guilty of judging others, too. I saw a post on a Facebook yard sale page showing a prom dress that was for sale.  The caption read, "Worn once. Perfect condition. Paid $400. Asking $275."

What the what, y'all? Somebody's mama paid $400 for a prom dress? A PROM DRESS! So I immediately text my friends and we state how much our prom dresses cost 10-15 years ago (because we're old) and suddenly feel very frugal and wise for spending our money on much more appropriate things, like Target and Starbucks.

Women are constantly being told, by ourselves and by other women, that we are not enough.

So back to Shelley's message. What do women need most?

Let me say it again for the people in the back: G R A C E

We need to offer grace to one another. We need to encourage rather than shame. We need to show love. We are told in Luke chapter 6, "Do not condemn, and you will not be condemned. Forgive, and you will be forgiven. Give, and it will be given to you." 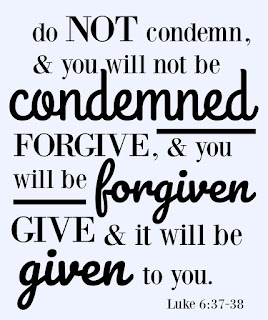 My child eats fruits and veggies daily, and her favorite snacks are pistachios and edamame. But the woman who felt the need to send me a message shaming me about my daughter's diet doesn't know that. And the lady who spent $400 on a prom dress? I don't know if she scrimped and saved and scraped together that money to get her daughter her dream dress. I don't know if she has a high-power, high-paying job that allows her to drop $400 on a dress and not bat an eye. But it's not my business to know, and it's not my business to judge. Just like it's not someone else's business to judge what I make for my daughter's lunch.

God's word specifically tells us not to judge or condemn others. But when that happens and we are judged, God's word also tells us to forgive. To extend the grace that the other person did not extend to us. I was having a conversation with a friend about forgiveness, and she said something very poignant: "...the people who've wronged me, they've moved on. I'm the one stuck. When I can truly forgive is when I'll be at peace."

Offering forgiveness and extending grace is not always for the benefit of the person we are extending it to. Often, it is for our own benefit. We can harbor hurt feelings and grudges for days, weeks, years without the other person ever even knowing. But showing grace and forgiving can release us from that hurt. And it opens us up to forgiveness for our own stuff, as well.