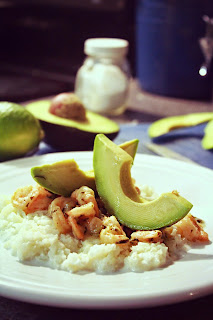 As my husband and I were driving home yesterday from a day of running errands. I just knew that the pork chops I'd taken out for dinner were not going to be thawed. My refrigerator has lofty ambitions to one day be a freezer, and it spends its days practicing, even though I continuously increase the tempurature. My fridge and I know each other very well, so I just knew those chops were still going to be frozen for dinner.
So, as we are careening down the interstate, I am frantically trying to come up with what I can make for dinner instead. My husband had just bought an iPad mini... "For work"... so we really didn't need to go out to eat. In all actuality, the iPad really is for his work, so I'm really not complaining... Or jealous...
So as we are quickly approaching our exit, I am racking my brain.
"Shrimp. We have shrimp. What can I do with shrimp. Tacos are good. I can't have tortillas. Mexican food sure does sound good though. What goes with shrimp? I have avocado..."
"I need cilantro," I announced.
My husband, doing his best impersonation of a nascar driver, veers into the exit taking us directly to Publix. It could not have been timed better if it had been scripted.
I enter the store by myself, which for a mom can almost feel like a mini vacation.   I knew I needed my cilantro. But if I'm getting cilantro, I'll need some limes. And what are we going to have with the shrimp? Coconut rice sounds good. I can't have rice. I can have cauliflower. So I found a small bag of pre-cut cauliflower florets because I was feeling incredibly... Let's say efficient instead of lazy. Then I headed to the Hispanic food aisle for a can of unsweetened coconut milk, realized that after ten weeks of taking Spanish classes, I still can't read the language, so I just guessed.
By this time my short excursion into the store had turned into a rather extensive expedition to find my ingredients. I quickly made my way to the register to pay and headed back to the car. 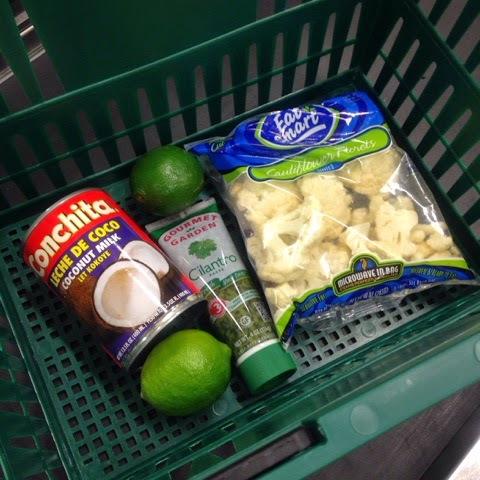 "It took you a long time to get cilantro," my husband said as I climbed into the car. "Yeah. I couldn't find the coconut milk." He just looked at me, wondering how the two items could possibly be related, especially since I had not mentioned coconut milk at all up until this point. Bless his heart, he knows not to question my logic, so he just let it go. He's a keeper. 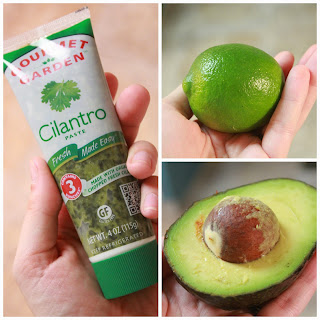 When I got home, I immediately thawed my shrimp by placing them in a colander under cold running water. Next I made a marinade for my shrimp. I combined olive oil, cilantro paste, lime juice, salt, pepper, and red pepper flakes. I placed my thawed shrimp, deveined and tails removed, into the marinade and put it in the fridge.
While the shrimp was soaking up all that flavor, I got started making my cauliflower rice. I used my cheese grater to shred the cauliflower into rice-sized pieces. I just made enough for me since my husband was getting real rice, so I probably only made about a cup of cauli-rice. Next I added 1/4 c coconut milk, about 1/2 tsp salt, and one stevia packet. I stirred it all together and brought it to a simmer, stirring occasionally until my cauliflower reached a desired softness, just as fluffy as rice. 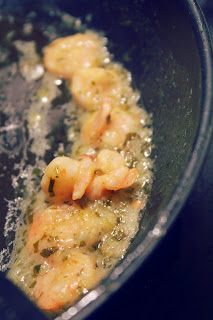 Now I did cheat a little bit with this dish. My shrimp was already cooked, cleaned, and de-tailed. It made for a very fast prep and cook time. I dumped the whole marinade with the shrimp into a skillet and brought it to a good simmer. I added a tiny bit of a cornstarch and water mixture to thicken the sauce just a little. Once the shrimp was heated through, it was done! 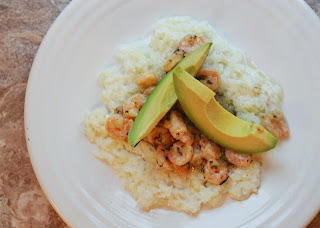 I sliced my avocado and placed a few slices on top of my shrimp. The cool, creamy avocado paired perfectly with the hot shrimp.
I was a little nervous to give it to my husband. He doesn't like too many foods. I gave him his plate and ran back to the kitchen. I waited to hear what comments he would have, if any.
"Oh, wow. It's sweet! What is this?"
I told him.
"This is really good. This is my new favorite." 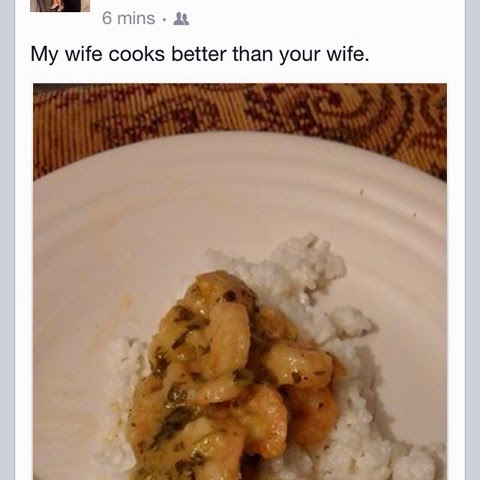 Apparently, I did a good job.
I love it when a recipe turns out better than I'd planned! This dish will probably be seen several more times this summer. It is a perfect, light, refreshing meal after a long, hot, summer day. 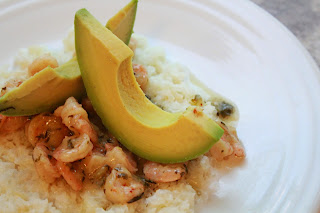