What I know now

So many of my friends have either just had babies or are about to have a baby.  A friend that I've known since kindergarten actually just had her sweet baby girl today!

It seems so wild that my own baby girl is already 3 and a half months old! It flies by! The sleepless nights and 3 am feedings now seem like a distant, blurry dream.  But while you're living it, it seems like it will never end. I remember one night when Parker would not stop crying. I just cried right along with her. Sometimes that's all you can do.  And that's ok. You don't start out being a parent getting everything just right. You are caring for a brand new person. A person who has never been in the world before. You will make mistakes. You will feel exhausted physically, mentally, and emotionally.

You will also feel more joy and love than you ever thought possible.  You will wonder what you did with your life before the baby was there. A friend of my husband's told him that when his little girl was born, he knew the first time that he saw her that he would not hesitate to give his life for her. My husband knew what he meant the minute Parker was born.  He went with her while the doctors cleaned her up and checked her out.  She held his finger the whole time.  He was in love with a tiny 8 lb, 20 inches long person: his daughter. 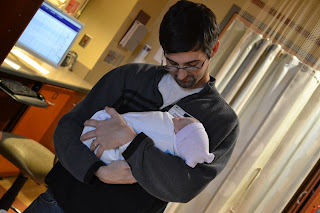 The first few weeks were the hardest.  People said it would get "better," but I didn't like that. It implied that something was "bad."  What we had, our baby, was great. Instead of getting "better" I said get "easier."  And it did. We learned what worked and what didn't.  I am by no means a parenting expert.  I've only been doing it for 15 weeks! But what I know now would have been great to have known in the early days, so I'm writing it down just in case it helps someone else.

1.  Newborns have their days and nights backwards.  You know how when you would lay down for bed at night while you were pregnant and baby would start to kick and squirm? That doesn't change just because she's been born.  She will sleep soundly during the day and party all night long. It takes some time to adjust, but you can help her. During the day, don't let her nap for too long.  Parker would sleep for 4 or 5 hours sometimes, right through a feeding.  Instead, wake her cute little butt up!  We started a 3 hour feeding schedule.   If she was awake when it was time to eat, good for her.  If not, we woke her up.  Change her diaper, take her clothes off, talk to her... whatever you have to do to keep her awake, DO IT! She will probably fall right back to sleep afterwards, but at least she was awake for a little bit. And the awake periods will get longer and longer.

2.  Along the same lines, keep the house bright and noisy during the day, and dark and quiet at night. This will help her internal clock get set and she will learn that day time is for play and night time is for sleep.


3. For night time feedings, keep them very quiet and the lights very dim.  At first we would turn on a small lamp on her dresser to feed and change her by.  But even the lamp was too bright.  We started using a small flashlight.  By keeping the lights down so low, she would stay sleepy and fall back to sleep easier. When you get up at night and turn on a big light, it hurts your eyes and wakes you up. Same with a baby. Keep those lights LOW!

4.  Set up a bedtime routine early and keep it up! We started Parker's bedtime routine at around 3 weeks.  She gets a warm bath every night. (We only use soap every other night so her skin doesn't get too dry.) After bath is time for lotion, which she loves! We dress her in a nightgown, turn the lights out, and feed her. It's the same every night. She has learned that the routine means bedtime is coming.  It helps get her settled down for the night. Plus, it's a great way to bond.

5.  Swaddle. Swaddle. Swaddle. Parker is 3 and a half months old and she still gets swaddled. Not for naps anymore, but still for over night.  She sleeps better that way. When she doesn't like it anymore, I won't force it, of course, but for now it really helps her sleep.  When she's not swaddled, she moves her hands around a lot and hits herself in the face and wakes herself up.  Being swaddled, she feels secure and can't startle herself awake.

This is just some stuff that we found that works for Parker.  And it works REALLY well for her. At around a month old, she started waking up only once during the night. By week 7 she was sleeping at least 7 hours a night. The last couple weeks she's been sleeping even longer. We had to wake her up yesterday morning because we had to be somewhere by 9 am. She slept for 11 hours!

I know that every baby is different, and like I said, this stuff works for mine. I hope it works for you too, but if not, you will find what does. You will be rewarded with love and giggles and smiles. It is the hardest job, but so worth it! Good luck, Moms!!
Labels: baby sleep sleep through the night sleep tips for baby