Back in college when I was an art major, one of the classes I took was for design.  We had projects to do each week.  Some I loved and some were just ok.  At least it was better than having to do math for homework!  One of the projects was to create a box around a certain theme that was personal to you.  I took this class two months after my husband and I got engaged.  The ONLY thing that was on my mind was my fiance, my engagement, and my wedding, so my theme reflected that.  For my box, I chose to make a memory display about our engagement. 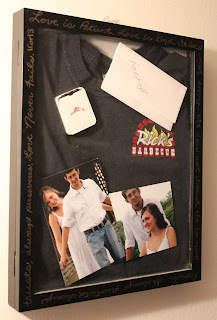 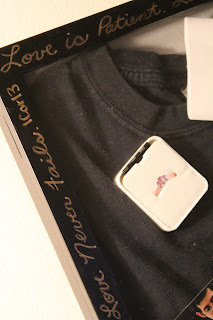 I chose a shallow display box rather than something bigger or deeper because I knew I wanted it to hang on the wall.  Everything inside the box is something special to me.  The black fabric is a t-shirt from the barbecue restaurant where we first met.  The paper in the top right corner says, "To The Beka."  When Andrew proposed, he did it through a scavenger hunt around his house.  My treasure ended up being my engagement ring.  The paper is the first clue from the scavenger hunt.  The white box is the bottom half of the box my ring came in.  I took a picture of my ring in the box and cut the ring part out to put onto the box so it looks like the ring is inside.  The two photos are from our engagment photo session.  I wrote on the outside frame of the box an abridged version of what was going to be our wedding verses: 1 Corinthians 13.

I made an A on the project and all the girls thought it was really sweet.  The guys thought it was cool that he proposed through a scavenger hunt.  The box still hangs in our living room where we can see it everyday.  It really means a lot to us both.

I wish I had taken pictures of the process used to make it, but that wasn't part of my grade, so I didn't think about it.  I'll do my best to explain.

-On the vellum, I printed sheet music, love quotes, and pictures.  (You can run it through a home printer.)
-I trimmed the vellum to be the right width and length to wrap around the vase without over lapping, then laid the vellum flat on my work surface.
-I cut out my pictures and quotes and arranged them onto the sheet music how I wanted them to be on the vase.
-Where I had laid the pictures and quotes, I used an exacto knife and cut around them on the sheet paper so that you would be able to read the quotes and see the pictures without the music notes behind them.
-Pick up the vellum with the holes cut out and use spray adhesive to attatch it to the glass vase.
-Attatch the pictures and quotes into the holes that were cut out from them using more spray adhesive.
-LET IT DRY COMPLETELY!!! Spray adhesive is flammable.  If you light your candle in the vase before it has dried, you may set yourself and everything around you on fire.  Please don't.

-I put a tea light in the bottom of the vase, and once it was lit, the flame illuminated the pictures, quotes, and music beautifully. 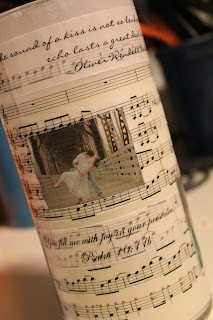 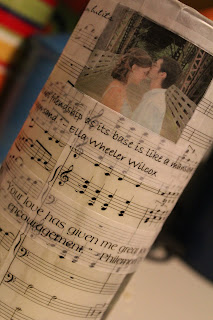 At our wedding, we used it to hold my bouquet that I was going to "toss"﻿ 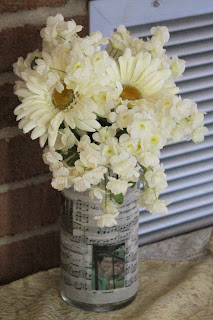