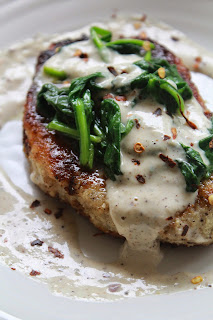 Hi, everyone! I hope you had a safe, happy Memorial Day.  Mine was spent in front of my computer finishing up a project for one of my English classes.  Only 6 weeks until I graduate! Yipee!!!

I actually started working on the paper yesterday after church.  Before lunch.  That was my big mistake.  When I start writing, I get in the zone.  Time passes and I don't even realize it.  So when my husband asked, two hours after we'd been home, how much longer the pork chops would be, I realized, "Oh, no.  I never started them!"

I had taken chops out the thaw Saturday morning, but they weren't thawed for in time for dinner (You can see what I made instead here). Sunday evening, we'd made plans to grill out at my in-laws' house, so I had planned on making the chops for lunch after church.  It totally slipped my mind. When I am in the zone, I am in it 100%, even to the point of forgetting to eat.  My poor family. I knew I needed to come up with something quick.

One of my mom's and grandmother's staples is pork schnitzel, one reason being is that it is so fast and simple to make. I started by melting two tablespoons of butter in a skillet over medium heat. My pork chops were already thin cut, so I didn't even need to flatten them out. I placed the chops in a ziploc bag with some coconut flower, salt, and pepper.  I shook it up, much to the delight of my two year old who thought it was the funniest thing she'd ever seen.  She's such a good audience.

I wanted to dress up the chops a little, since I really didn't have anything planned to go with them.  Remember, my brain was still caught in the American Renaissance, running rampant through Nature with Thoreau and Emerson.

I grabbed some half and half (left over from this recipe) and poured about 3 oz I guess into the pan where I'd been cooking the chops in order to make use of all that browned butter left in the bottom of the skillet. I brought it to a simmer and added some shredded Italian-blend cheese (Italian cheese with schnitzel? It's like a tour through Europe without leaving home!). I seasoned it to taste with a bit more salt and pepper and, to give it a nice kick, some red pepper flakes. Allow the sauce to simmer until its almost as thick as you want it; it will thicken more as it sits.

To add some color to my plate (and some veggies) I sauteed a handful of spinach in butter with garlic powder, placed it on the schnitzel, and topped the whole thing with my creamy, spicy cheese sauce.

It may not be exactly how my family makes it, but I think they'd like it nonetheless.

Do you have a family recipe you've made your own? I'd love to hear about it in the comments!