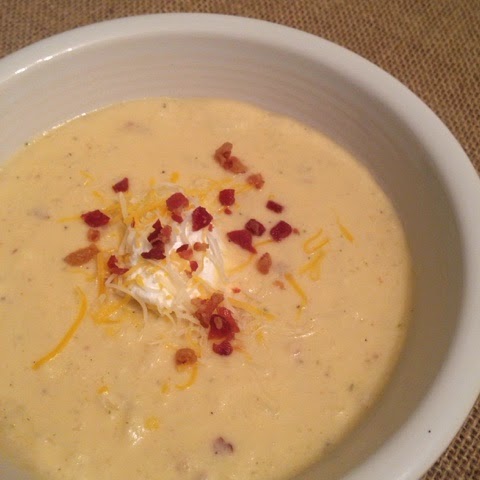 A few nights ago, I made mashed cauliflower as a side dish with some steaks I made. I had a bunch leftover, and I knew just what to do with it.

Potato soup is one of my ultimate comfort foods. I usually make it once a week during fall and winter. However, going low carb, I haven't made it like I usually do.

After a long day yesterday, I was craving some warm, creamy soup. I figured, if I can make mashed cauliflower to mimic mashed potatoes, why can't I make it into soup?

It was really simple to make since the cauliflower was already cooked. I had used the same recipe to make the mashed cauliflower as I did here. I refrigerated the leftovers- about two cups or so. To make the soup, I just popped them into a pot with an extra cup of water and two chicken bullion cubes and stirred it really well. Once it was boiling, I reduced the heat and added two tbsp ranch dressing, one tbsp buffalo sauce, a cup of cheese, and seasoned it to taste.

It was perfect! I made myself a huge bowl and topped it with sour cream, a little more cheese, and some bacon bits. I was already to eat it when my daughter, who had already had dinner, comes running toward me yelling "Soups!"

She ate half my bowl.

I didn't mind. It was healthy! And she's so picky, I was happy to share something she'd actually eat!

I love turning one meal into two. I even have some leftover today for lunch! Perfect for a rainy afternoon :)