I am THAT mom.

The one that planned her daughter's first birthday for six months prior to the actual event.

But you know what?

It was worth it!

I had the most fun ever getting ready for Parker's "Cute as a Button" themed party.  Everything was DIY- from the food to the decor.  It took a while to figure out what was going to be needed and just how to go about doing everything.  I realized though that if I could have any job in the world, it would be party planning.  I love this stuff.  I think I planned more for this party than I did for our wedding!

It all started with a picture that I found on Pinterest. It is from Hostess with the Mostess.  I fell in love with the idea- the gallery wall, the buttons... It was precious.  And I had to create my own version.

I began working on the items for the gallery wall first.  The button monogram was my first piece.  The frame is actually painted foam board cut out.  Much cheaper than buying a real frame! For the monogram, I printed off the "P" and simply covered it in buttons.  So easy. 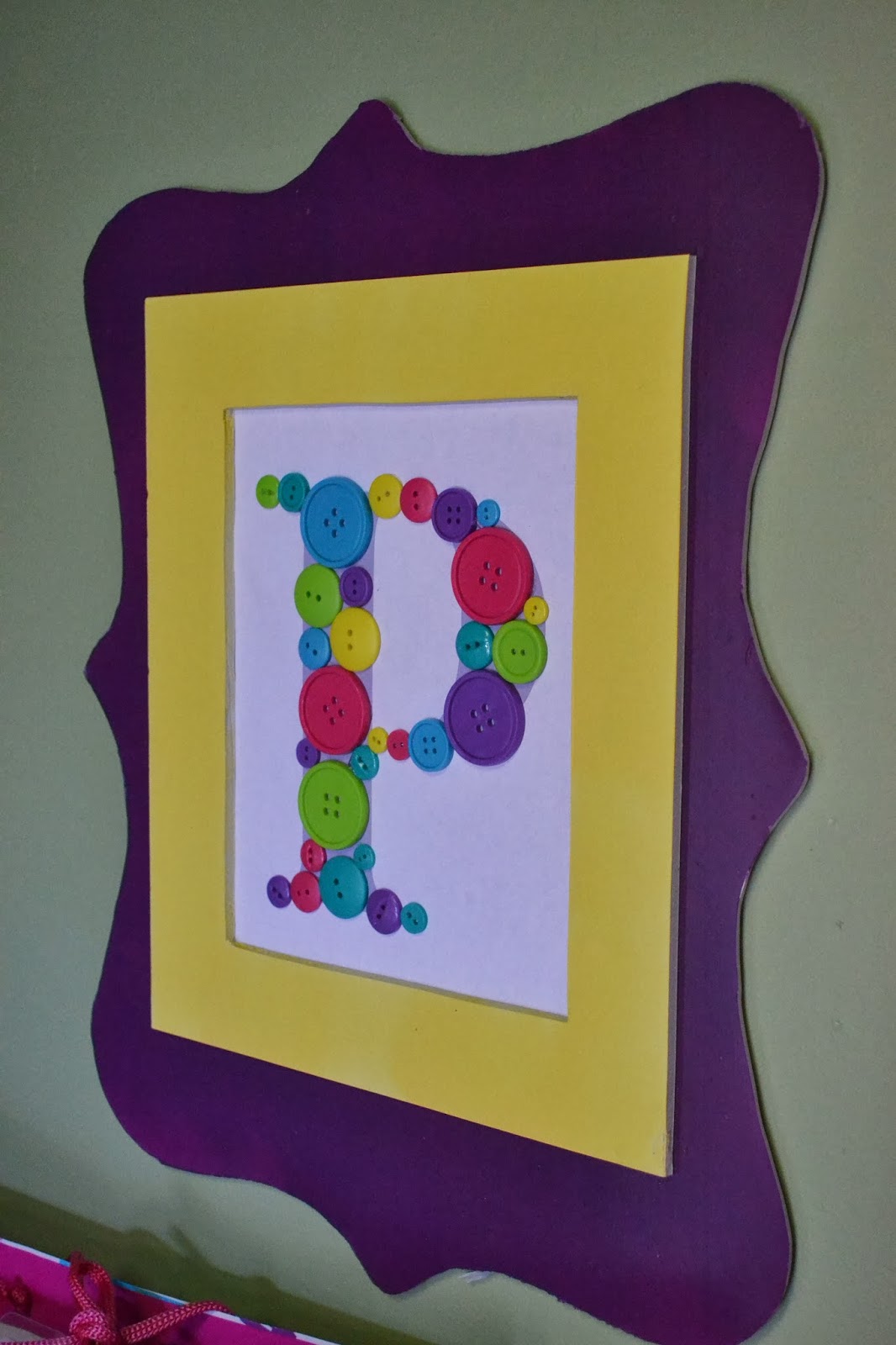 Instead of buying a cake, I made cupcakes.  That way no one would have to spend any time cutting pieces.  Everyone could just walk by and pick one up.  I did want to make them cute, though, but I am not a cake decorator by any means.  Instead, I wanted them to be simple.  Rather than try (and fail) to decorate them, I decorated toothpicks instead.  Trust me, I am much better with a glue gun than with a piping bag! For these little guys, I bought a decorative hole punch, scrapbook paper, and tons of buttons.  I punched out my paper circles and hot-glued a button to the front center and a toothpick to the back.  Time consuming? Yes. Worth it? Just as much! 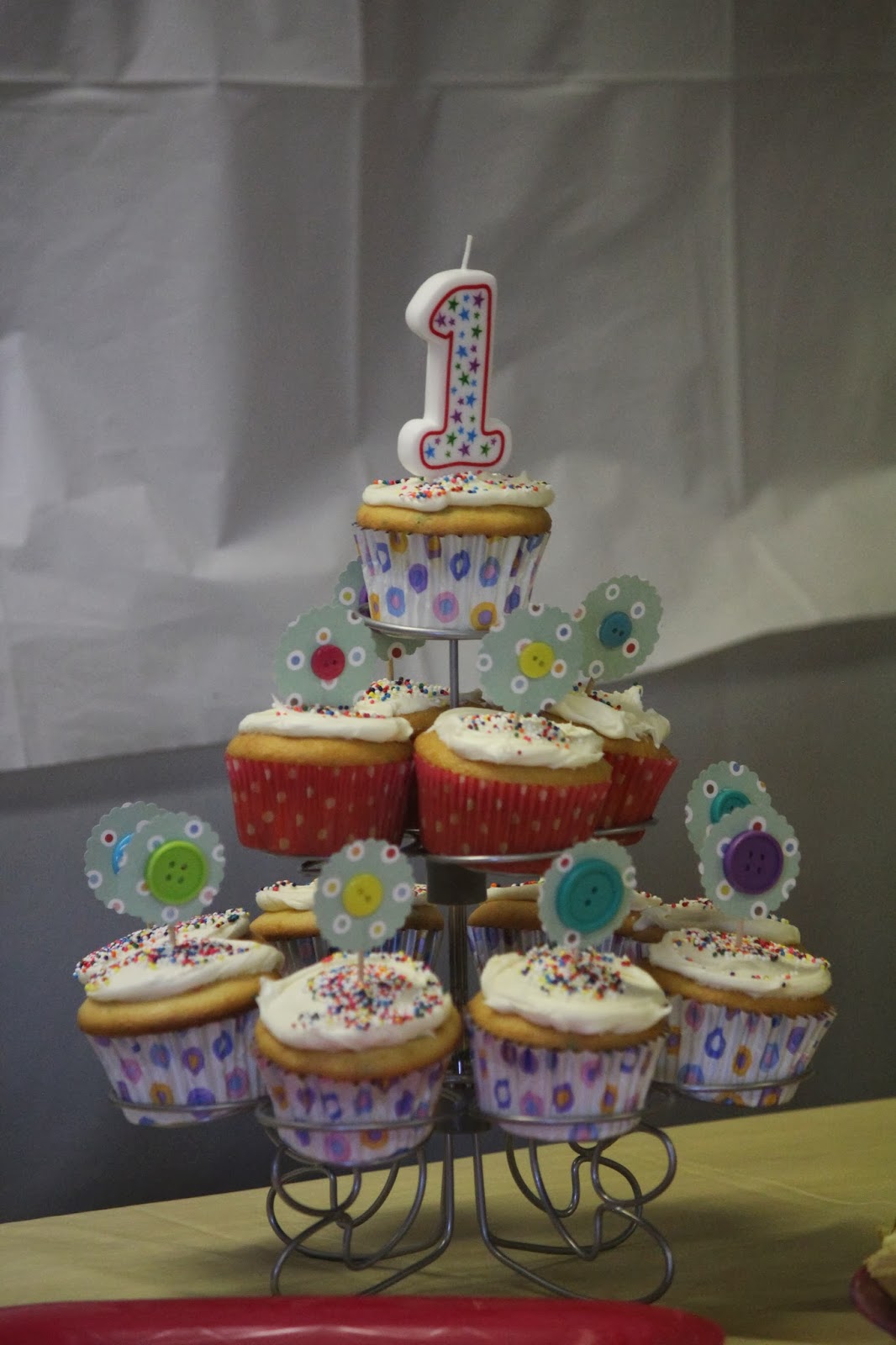 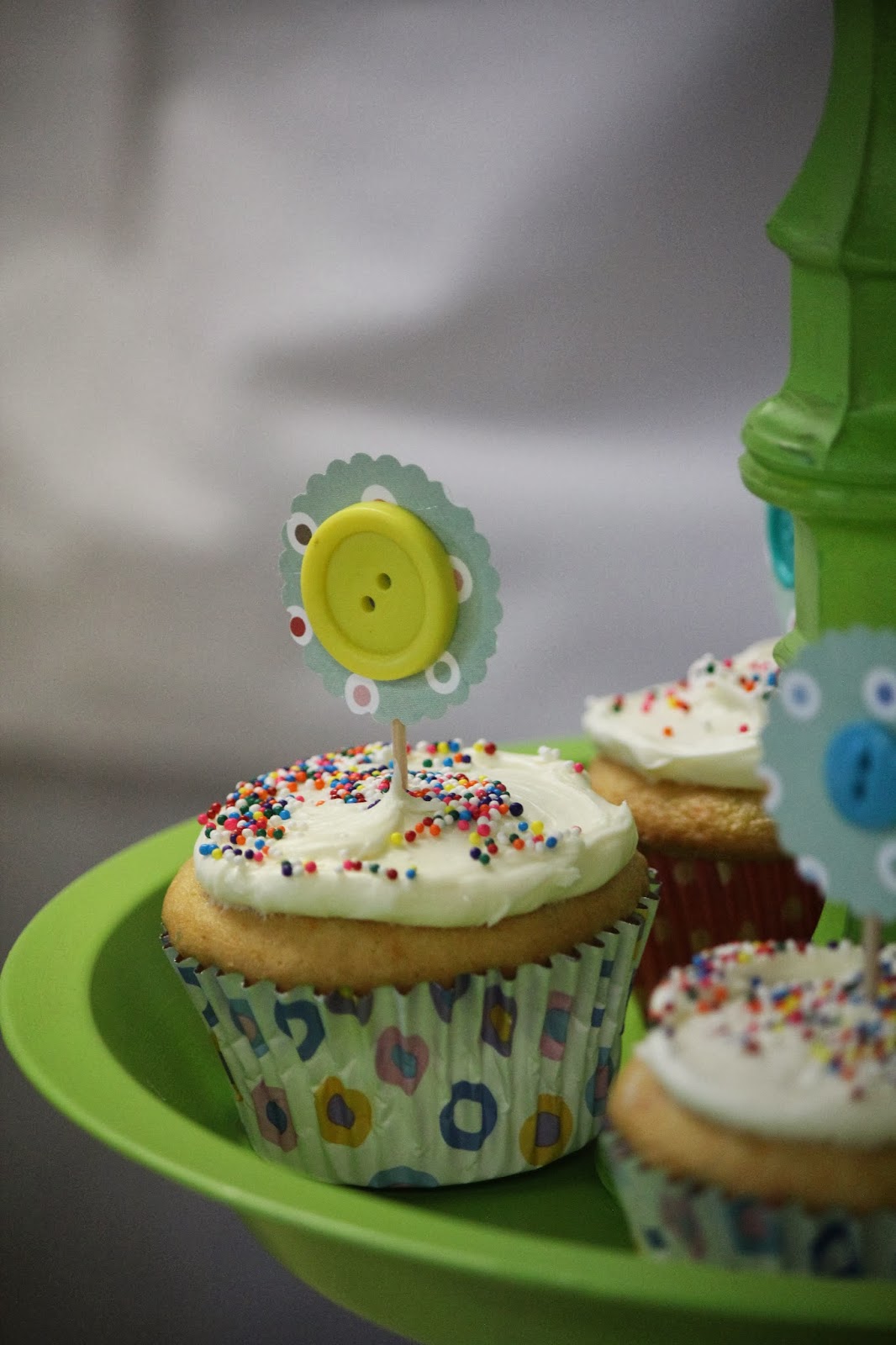 My next project was my "Cute as a Button" painting.  I liked the one from my inspiration picture, but I didn't want to just recreate what someone else had done.  Instead, I painted the canvas, made button flowers and hot-glued them to the canvas, and then hand-stitched (yes, HAND-STITCHED) stems and leaves under the flowers.  For those of you who may not know, I do not sew. At all. Ever. But anything for the baby, right? I used this technique to trace my words and filled them in.  It turned out so well! 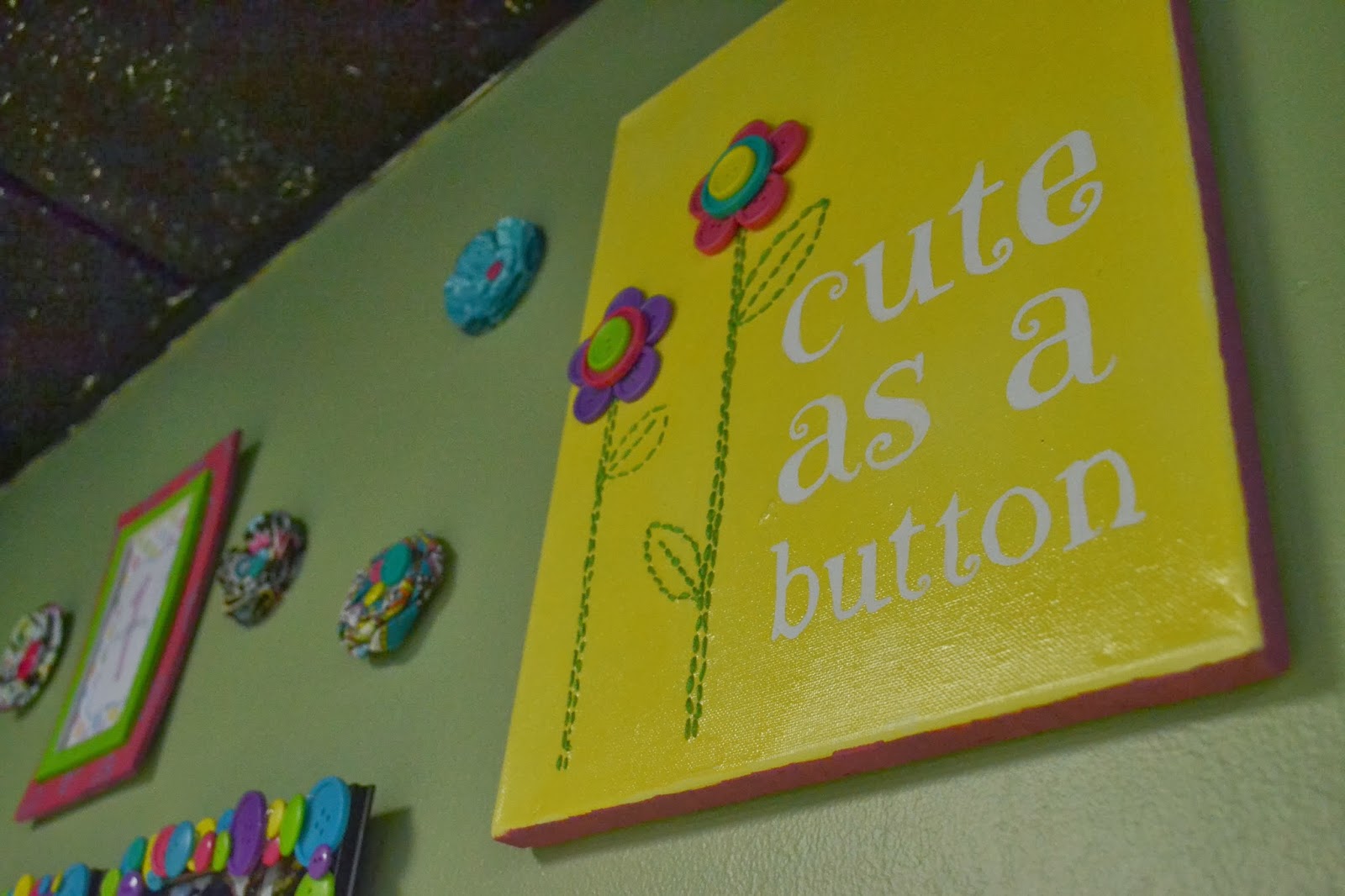 I wanted to add some extra posters to the wall, so using the the left over foam board, I framed two small graphic designs that I created using picmonkey.com 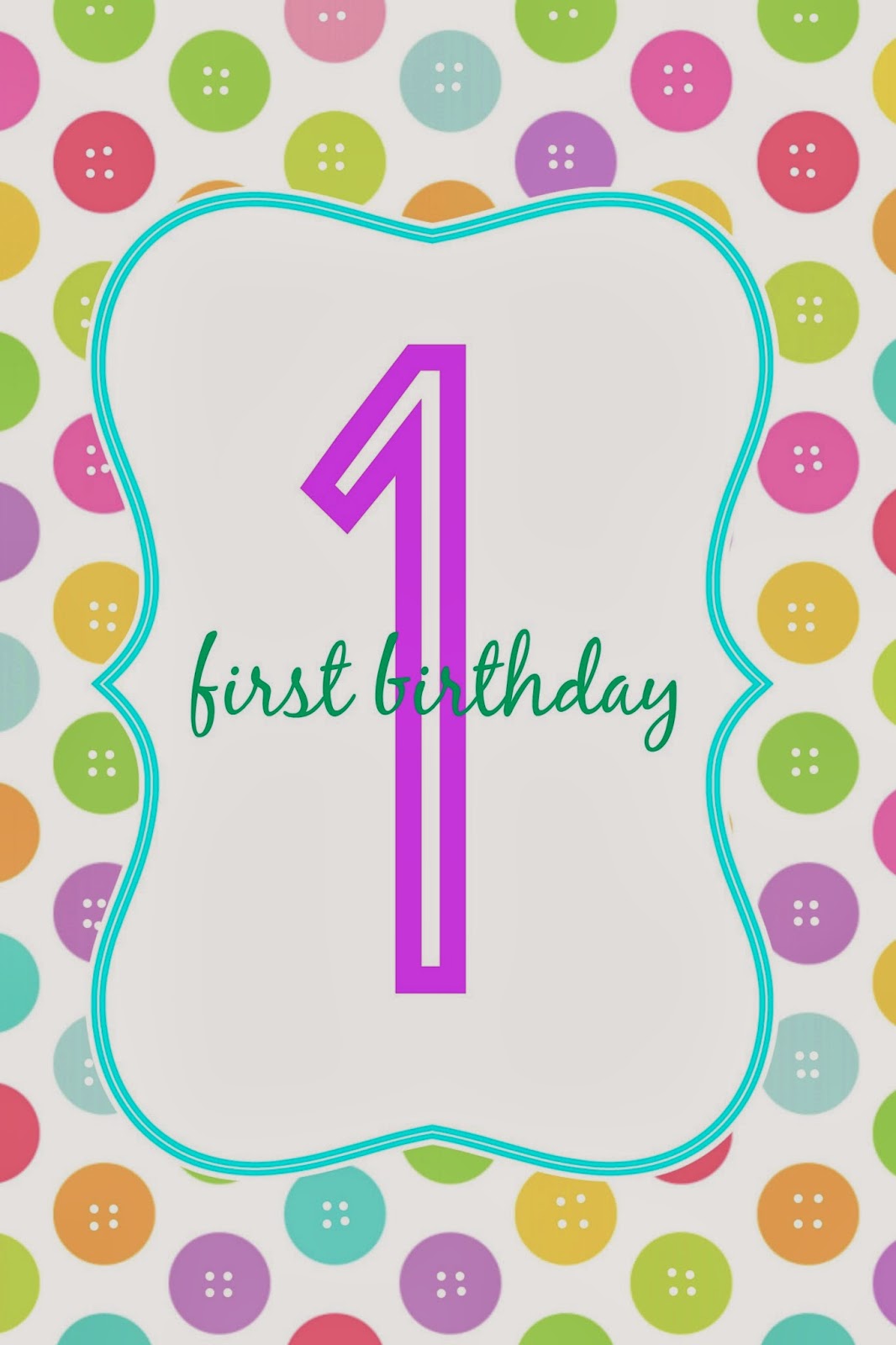 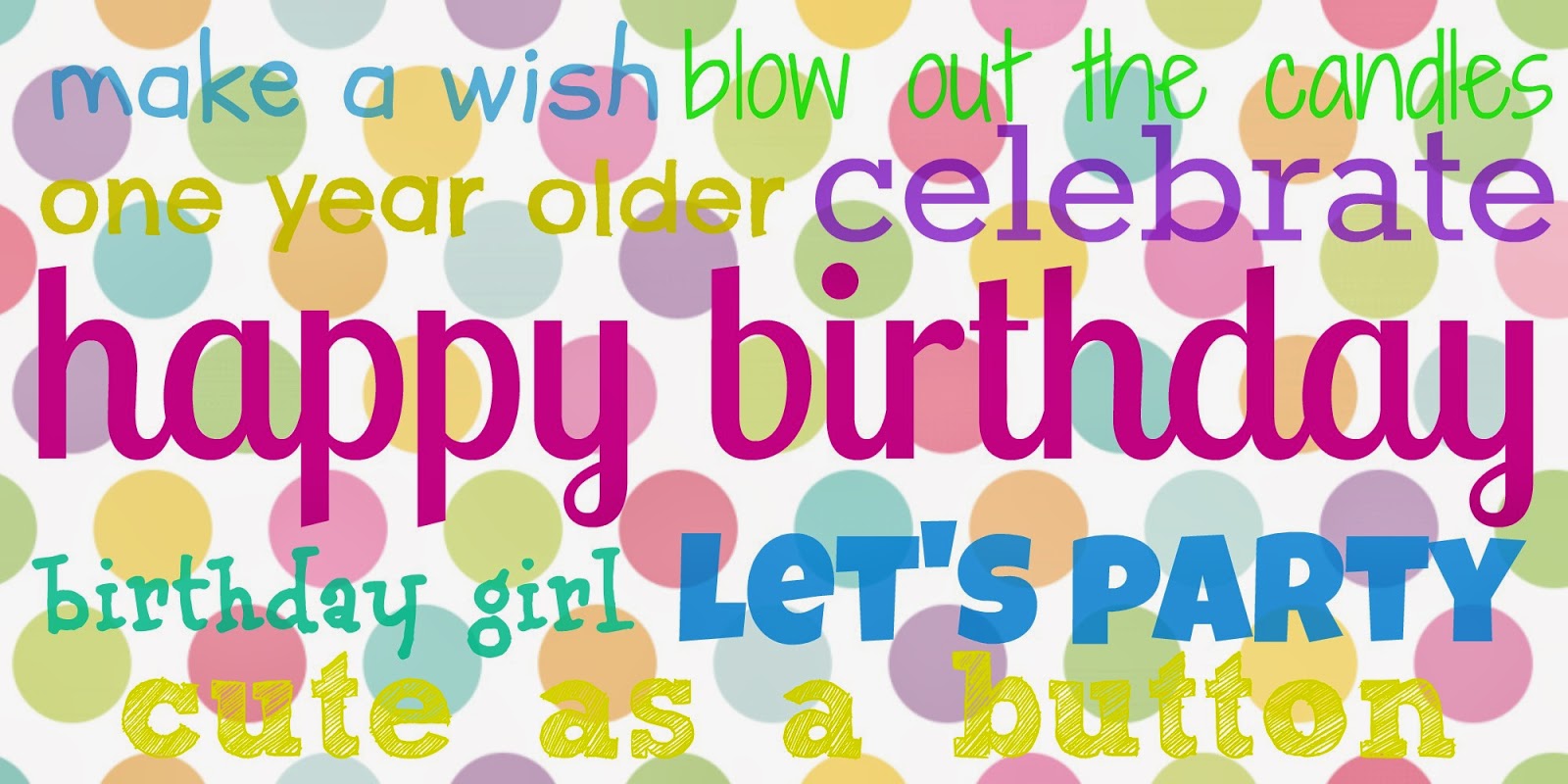 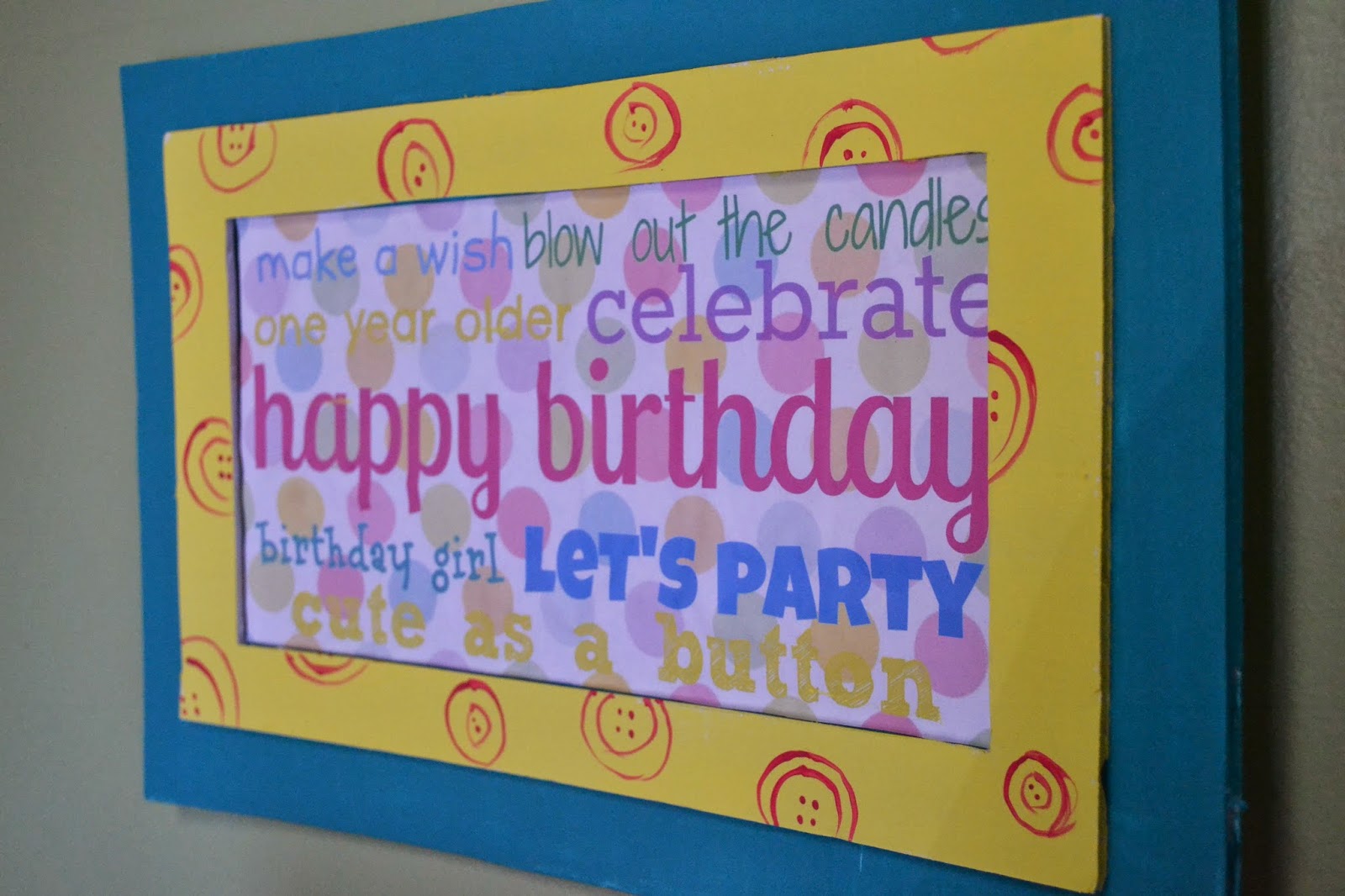 I bought frames from the dollar tree and covered them completely in buttons! These hung on the wall as well: her pictures from 3, 6, and 9 months. 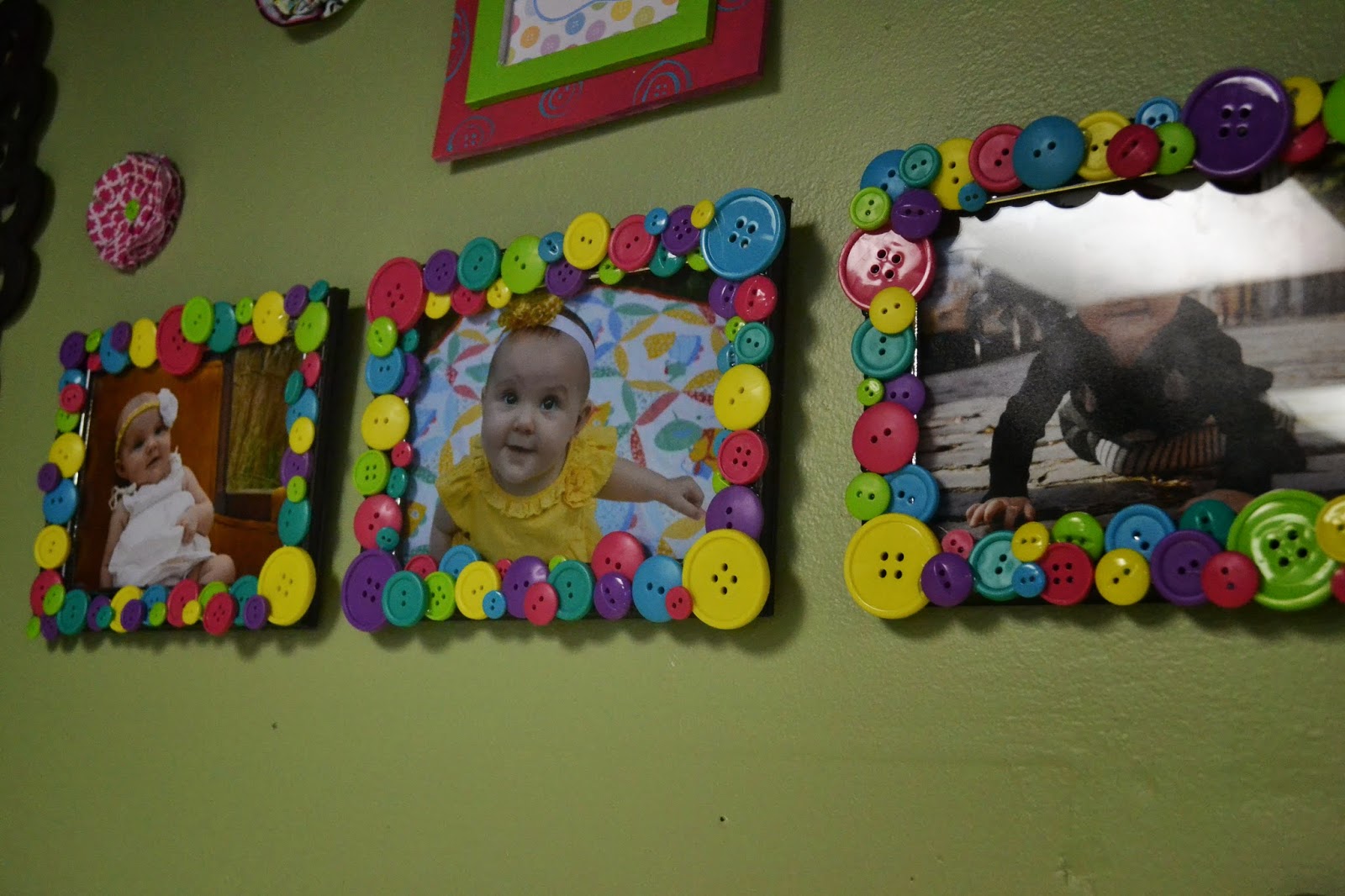 I finished the wall with two big prints in fancy frames and some fabric flowers, and the gallery wall was complete! 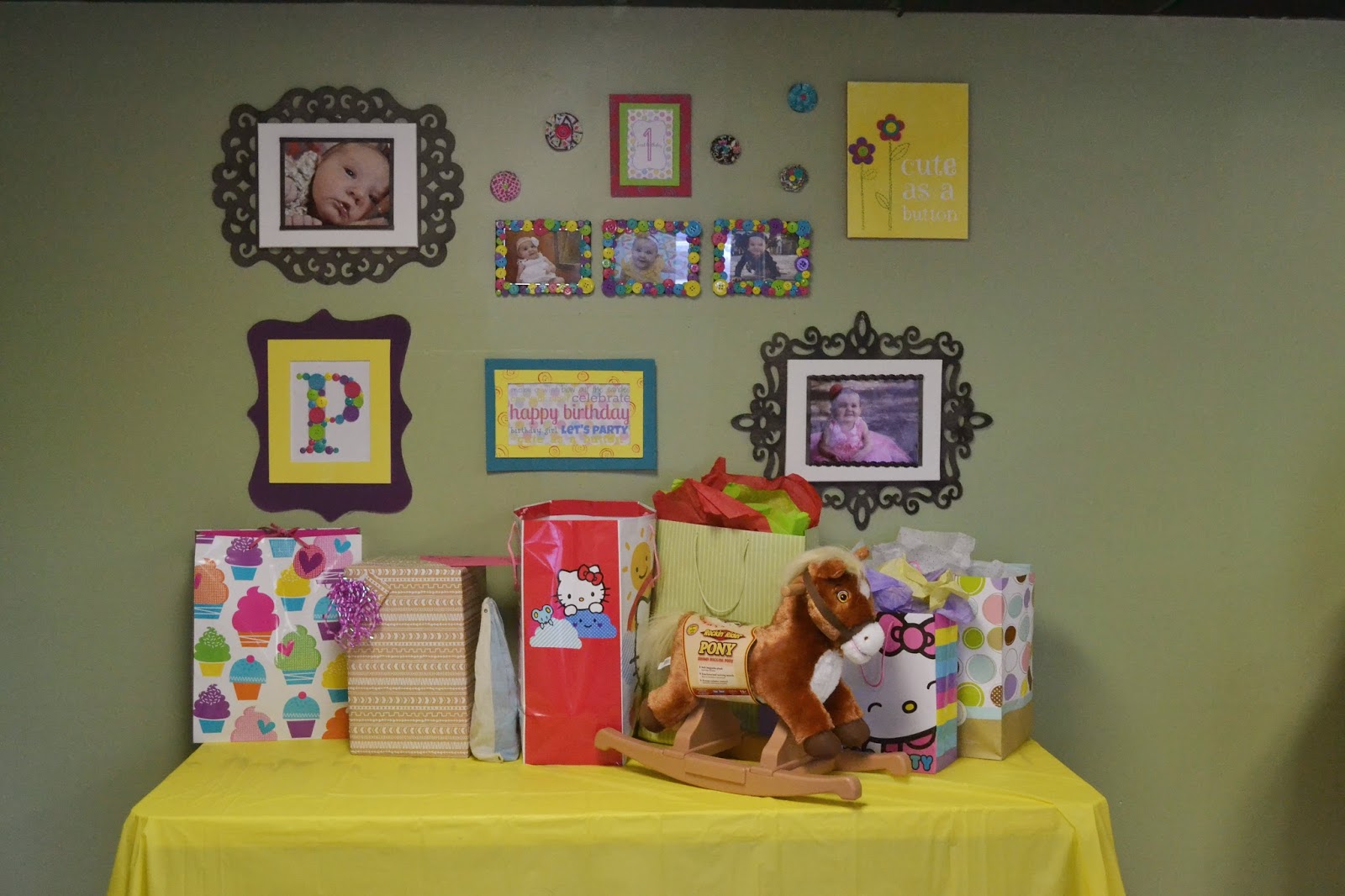 For the tables, I found some really pretty burlap and lace ribbon to use as a table runner. There was no sewing involved! On the runner, I put pictures of Parker from newborn to one year.   I found some beautiful, bright flowers and put them in my decorated jars.  I also made marshmallow pops for guests to enjoy as they sat around.  Those were so simple! 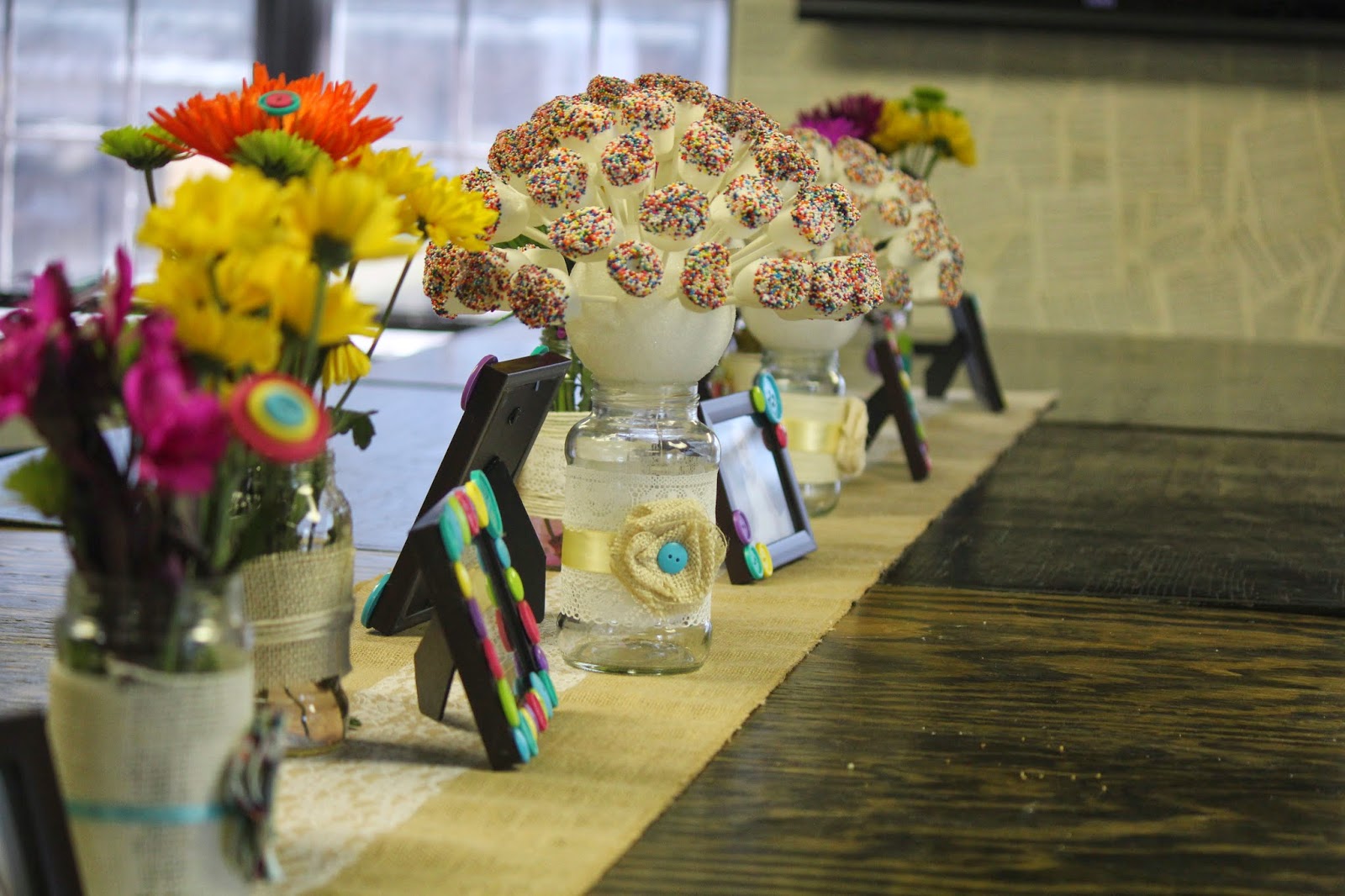 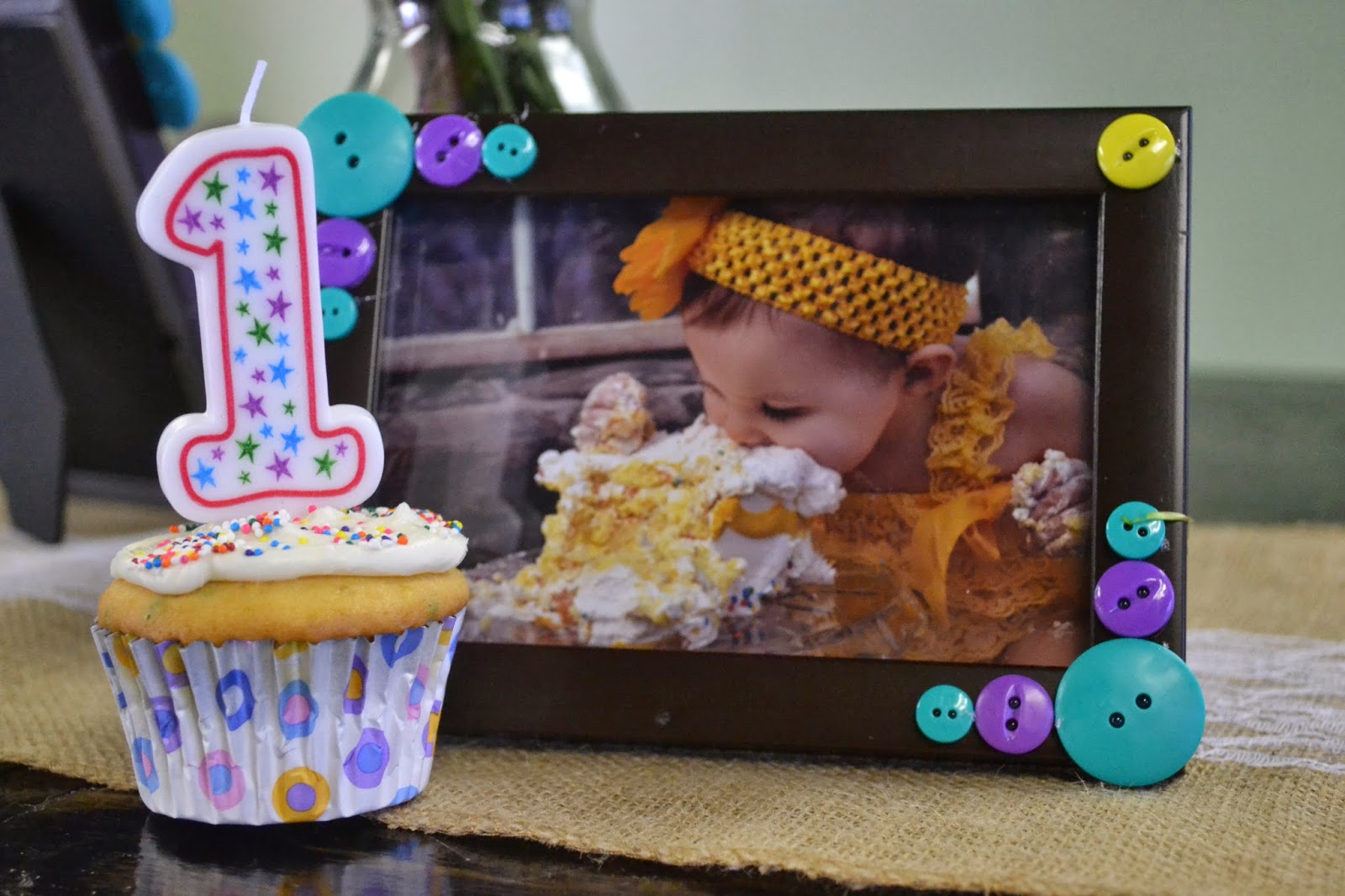 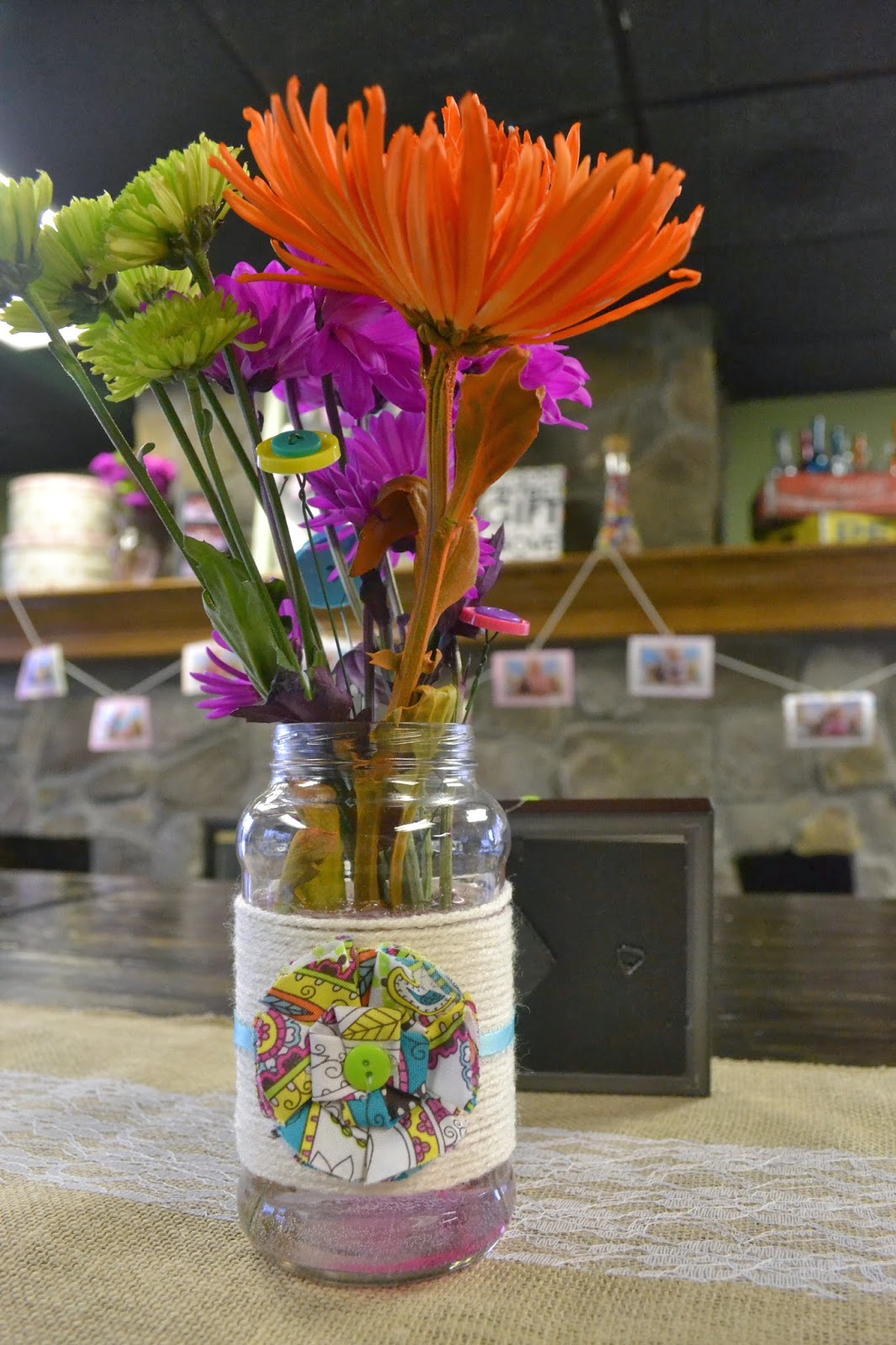 I had originally wanted to fill the jars with all button flowers, but after I realized that would take WAY to many buttons, I intermingled the button flowers with the real flowers.  It was the perfect touch! 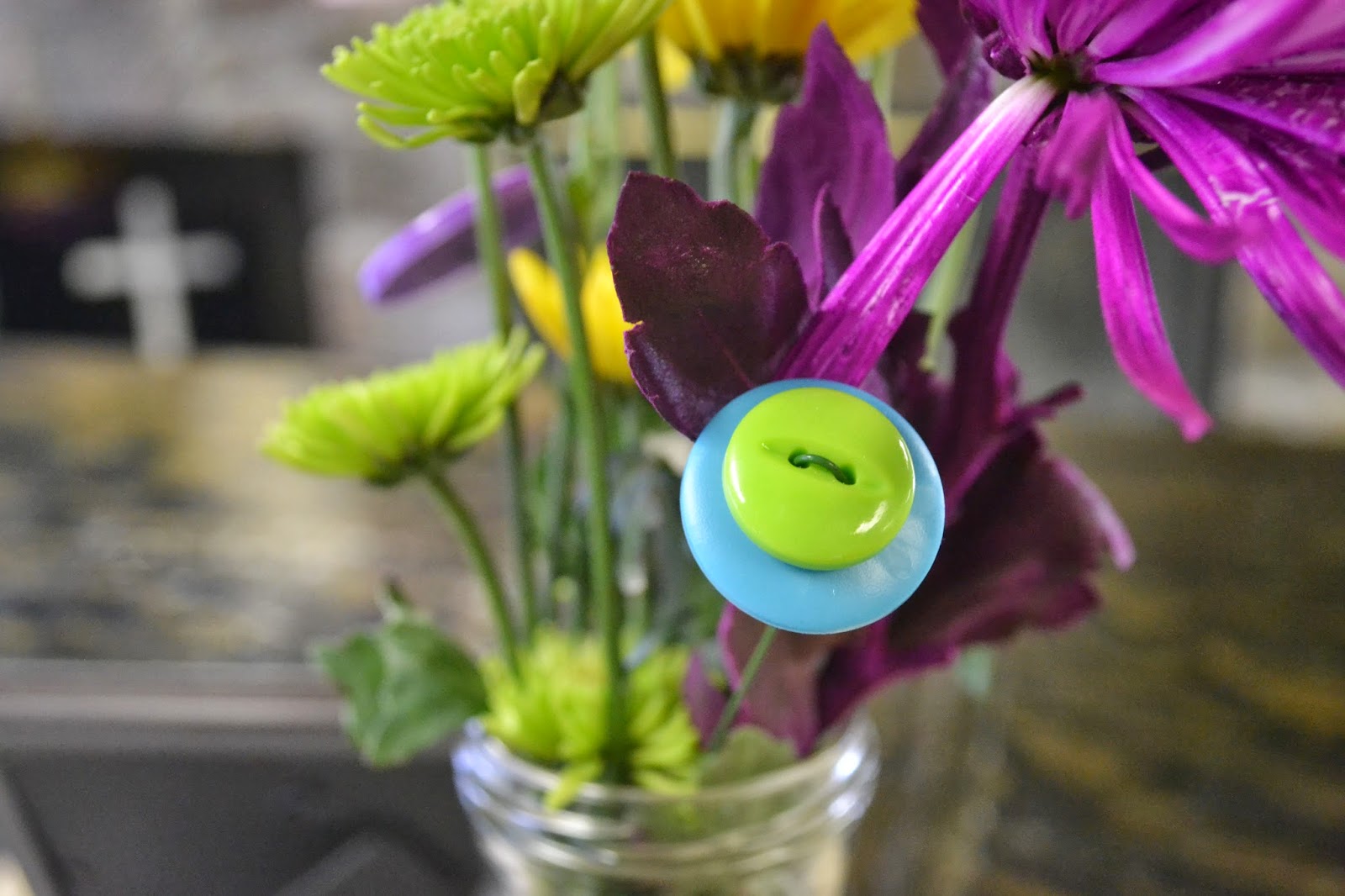 The marshmallow pops were insanely simple! Dip half a marshmallow into water, let drip, and dip it into the sprinkles.  They held up very well for the party and all the kids loved them (and the adults too!) 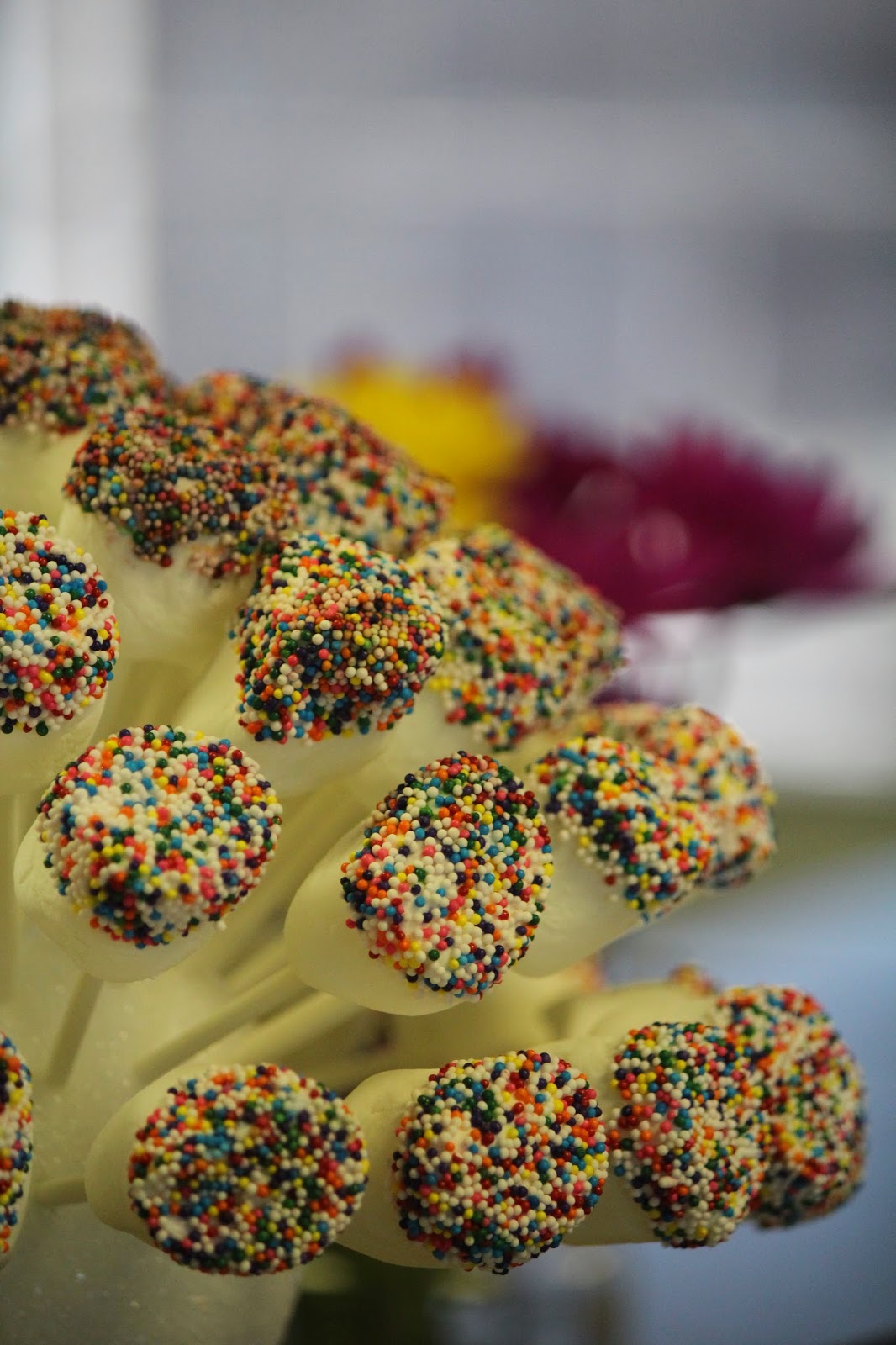 I made a tutu for the highchair using this technique, but instead of putting it on elastic, I used yarn and attached it with tape. 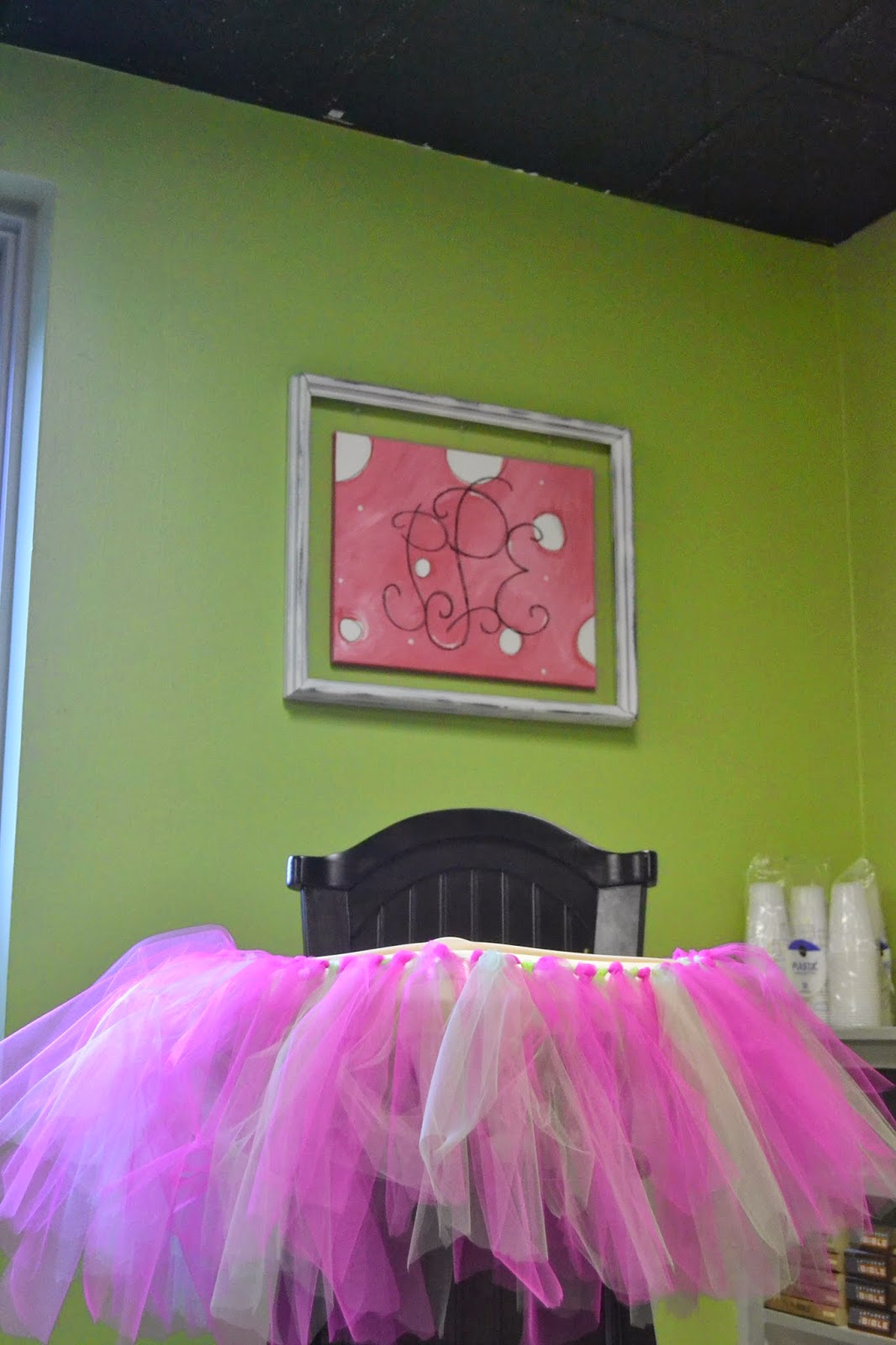 Parker's party was as fun as could be! I still can't believe my sweet baby is one year old! I had a blast decorating and planning her party! I'm already looking forward to next year! 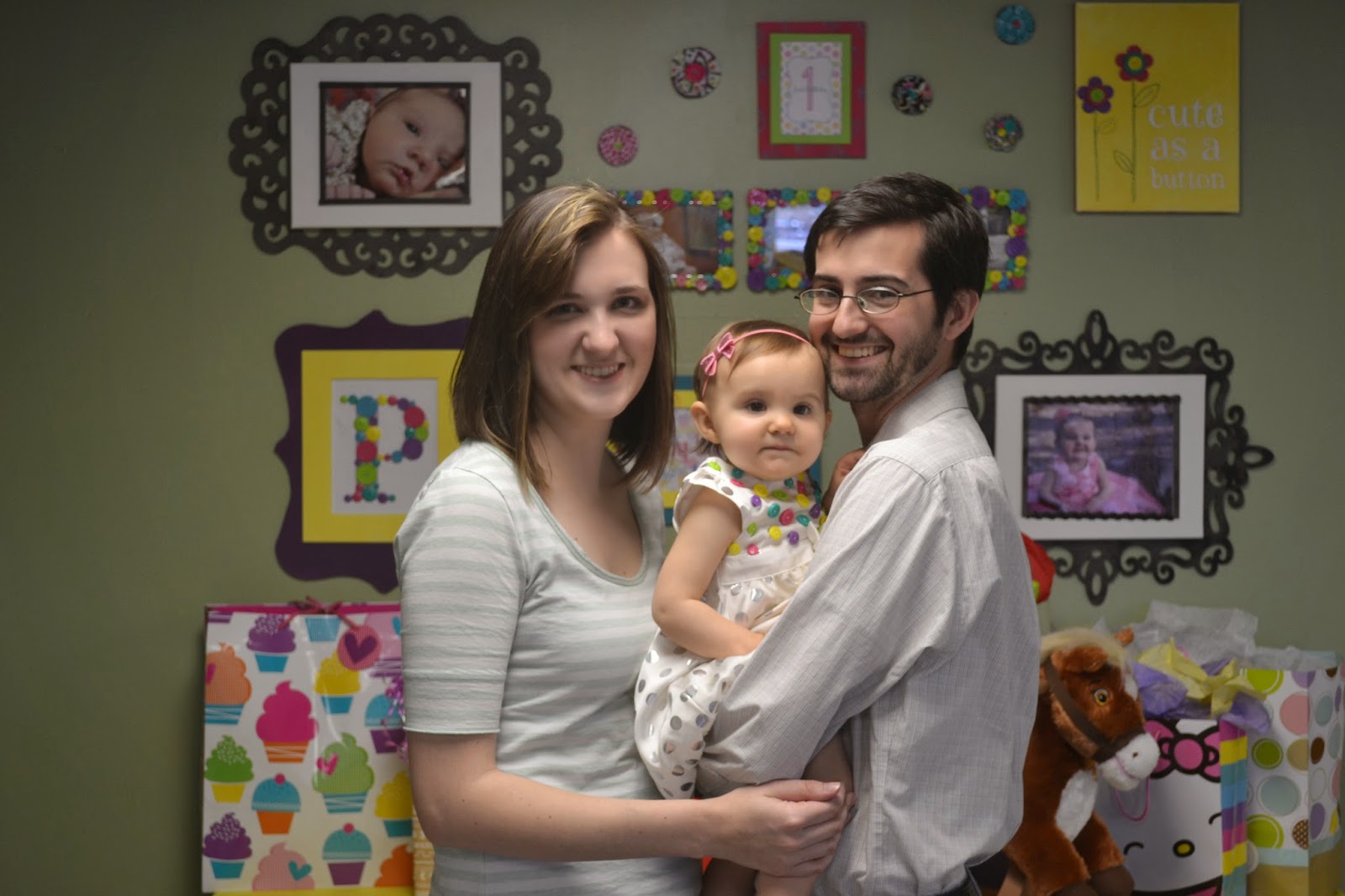