We are so beyond excited to meet our sweet baby, little miss Parker Elizabeth, come March!
We had the ultrasound yesterday, and miss thing was being so stubborn!  Husband said she must take after me.  This was before we knew she was a SHE.  She wouldn't sit still to get pictures of her heart taken, then she wouldn't move when it came time to find out the gender.  We had told the ultrasound tech that we wanted to have the gender written down so we could have a gender reveal later.  She was so sweet in accommodating us!  When it was time to look "down there," she told us to avert our eyes and she wrote the name of our baby on the picture that showed the gender. She put the picture in an envelope and we got to take it home.
We gave the envelope to a friend who went and filled a box with balloons for us to open. It was wonderful to see a bunch of pink balloons come flying out of the box! My grandfather was hoping for a little girl, and since I'm due on his birthday, he said he got to pick :)
My friend also made this beautiful piece of art to hang in Parker's room. 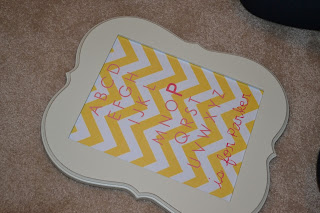 It was such an emotional day! Now I really can't wait for March so I can meet my sweet daughter!
Labels: baby gender girl party photography pictures reveal