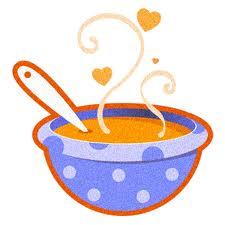 There is nothing I like more on a cold night than a warm bowl of soup.  Last night I helped a friend work a pumpkin patch, selling pumpkins as a fundraiser for her church.  It got pretty windy and chilly, so when we were finished, she came back to our house and I made some Creamy Broccoli and Cheese Soup.  It was a simple, filling dinner, and it took very little time to make.

Directions
Simmer the broccoli in the chicken broth until soft (but not too mushy). While the broth is still simmering, stir in two cans of cream of chicken soup.  Combine 1 tbs cornstarch with about an ounce of water (add water until you can stir it easily and it looks like the consistancy of milk).  Bring the soup to a rolling boil, and (while whisking) add the cornstarch/water mixture. Reduce heat.  Stir in 1 cup shredded cheese until melted. I did not have to add any extra seasonings to the soup because the broth was so flavorful and the cream of chicken soup already has salt.

Unfortunately, pregnancy brain go the best of me,and I left the rest of the pot of soup out all night :(  This soup is so quick and easy to make, though, I'm sure I'll whip up another batch soon!