I am so excited for fall to almost be here. I love everything it brings: cooler weather, football, sweaters, and almost-most-importantly SOUP! 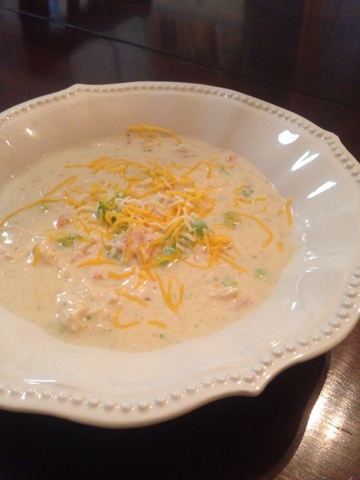 Cheesy Broccoli Chicken Soup
PART ONE
1 large chicken breast (2 if they're small)
Butter for sautéing the chicken
Salt and pepper
Diced carrots
1 c chicken broth
Garlic powder, onion powder, and seasoned salt
Season the chicken with salt and pepper and brown it in the butter over a medium-high skillet.
Remove chicken and finish cooking in the oven while you make the rest of the soup.
In the same pan you used for the chicken, add carrots, chicken broth, and other seasonings. This can be over seasoned because you'll add it to the soup later on. Allow carrots to cook until soft while you make the rest of the soup.
PART TWO
3 tbs butter
1/4 c flour
3 c chicken broth
2 c half and half
Seasonings to taste
A "handful" of shredded Colby jack cheese (I never measure cheese or seasonings)
Carrots in the broth
2 cups (ish) Frozen broccoli
Chicken breasts from part one, shredded
Cook broccoli according to package directions and set aside.
Melt the butter in a large pot. Add flour and combine. Allow to cook for a few minutes until slightly golden. Add chicken broth a little at a time and whisk well. Bring to boil to thicken. Reduce heat.  Add carrots and broth. Add half and half. Allow to simmer to thicken, but stir frequently so it doesn't burn. Add cheese, broccoli, and chicken. Season to taste. Add chicken broth as needed if it gets too thick.