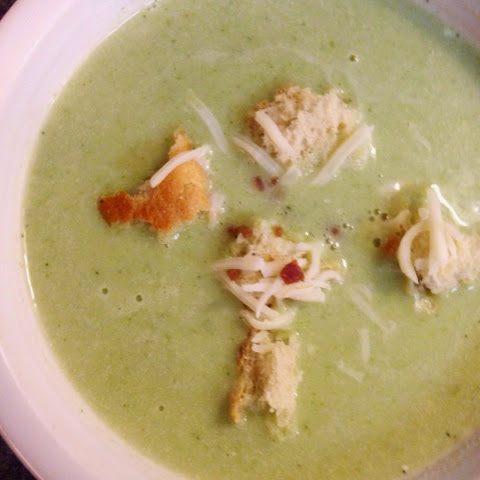 It always amazes me how a recipe I have every intention of following quickly becomes my own creation. I found a broccoli, chicken, cheddar soup recipe on Pinterest. I had chicken thawed and needed to cook it, but I really wanted soup to help fight this arctic blast that's pounding its way through the nation and my typically-warmer home state of Alabama. I also had broccoli. That's where the similarities stopped between my recipe I started with and the dish I ended up with.
The original recipe called for 8 cups of chicken broth (check), frozen broccoli (check), cooked and cubed chicken (check), milk (check), cheddar cheese (nope), and a whole bunch of other stuff (nope, nope, and nope).
I brought my chicken broth to a boil and cooked the frozen broccoli for about 5 minutes. Then I used my new favorite kitchen tool- my immersion blender- to blend it into the broth. I added a roux to thicken it. I did not add extra seasonings like the original recipe called for; the chicken broth had plenty of flavor. I also did not add the chicken at this point like the recipe said. The chicken was already cooked, so there was no reason to cook it again.
Once the soup thickened, I added a splash of milk to make it more creamy. The. I added about a cup of light mozzarella (because Aldi had it on sale!) and about 1/4 block of cream cheese. That's not too much since the soup made so much. It melted into the soup, I added the chicken, and the soup was nearly ready to serve.
I ripped up a piece of sourdough bread and toasted it in the oven. I used it to top the soup with a little bit more mozzarella and some bacon bits.
Perfect for combating our 11* temps!