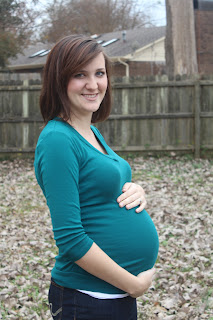 We're in the home stretch now.  Starting my 27th week means the start of the third trimester! Parker's due date is 88 days from today.  Wow! The time has really flown by. We still have so much to do!

Parker has really grown a lot in the last couple weeks.  She's starting to invade territory previously held by my lungs, so breathing has become a bit more difficult.  I'm becoming one of those pregnant people who huff and puff... and waddle lol

She's still kicking up a storm! She seems to kick the most around 10 am and then later in the afternoon and night.  My husband likes to "play" with her.  She'll kick a bit, then he'll kind of tap right where she kicked. Then she'll kick again. They'll do this back and forth several times. It's adorable. She is going to be such a daddy's girl!

I have a date set for a baby shower to be thrown by my mother-in-law and a very close friend.  I'm pretty excited.  At all of my wedding showers, we had severe weather. I'm talking tornados. Because of this, I didn't really get to celebrate at the showers. Kind of hard to when you're all hiding out in someone's basement with no power =) The baby shower will be better. I can't wait to celebrate our first child with family and friends!

How far along? 27 weeks, three days ( I did much better getting this post done on time compared to the last one!)
Size of baby: The size of a Rutabaga, apparently. Close to 15 inches long and over 2 pounds in weight.
Total weight gain: 19 pounds according to my last appointment. And it's all in my belly.
Stretch marks? None so far =) Keeping fingers crossed (and lotion applied!)
Sleep: It's been a little more uncomfortable recently.  I use a body pillow, but my hip will go numb sometimes.
Best moment this week: Hearing her heartbeat! She's still holding a strong steady beat in the 150s
Worst moment this week: I forgot to eat breakfast this morning (we were running late) and my blood sugar dropped during church =( I felt like I was going to be sick and/or pass out.  Lesson learned!
Movement: Lots and lots! We watch her move and feel her several times a day.
Food cravings: Still orange juice! Parker really likes it, too.  When she gets a taste of it, she kicks around =)
What I miss: Being able to cook without getting grossed out and tired.  I love to cook normally, but it's to the point now that I dread dinnertime.
What I am looking forward to: We booked a 4D ultrasound!!  It will be December 29th, so by the next post, we should know pretty much what she's going to look like =)
Weekly Wisdom: Don't skip breakfast!!