Ants in the Pantry... And why I'm thankful for them

Wednesday night, I opened my pantry, and I saw one.  An ant.  A little, tiny sugar ant.  But where there is one, there is bound to be more. I followed it, knowing it would lead me to its friends.  They were crawling all over a forgotten bottle of maple syrup in the back of the pantry.  And so, I began the arduous task of inspecting every box and bottle of food in the pantry for an ant invasion.  With food spread out all over the floor and kitchen table, I looked back in the pantry and noted that the only foods I had skipped checking- the ones I didn't even bother with- were my mother-in-law's canned goods.

Over the summer, my in-laws canned jellies and peppers and salsas and other fruits and veggies.  Preserving foods by canning makes them last just about forever because they don't go bad and nothing- not even a little sugar ant- can get inside. I knew I didn't need to check them for ants because there was no way they could have gotten inside.

Instantly, I was struck by a Bible verse from my women's Bible study from the night before:

Isn't that just what God does for us? He preserves us so we can withstand anything that comes our way.  Without being preserved, those fruits and vegetables would be long gone by now, having succumbed to their environment, just as we would have without God's preservation of our lives. The "good" is kept pure and safe and the "bad" is kept from invading- simply through the preservation that comes when we open our Bibles and receive His Word.

We all have "ants" that set out with the intent to invade: negativity, stress, distractions, anger, unhappiness, sadness... The list goes on.  But isn't it a blessing to know that if we are preserved by God, those ants have nowhere to go?  We are protected.  I'm not saying they won't try to get in; I'm saying they won't be able to.  If we are rooted in God's Word, we have the protection we need to withstand the enemy's invasion. That protection comes from being immersed in the Bible- turning to God for strength to endure.

It's a strange feeling- to be thankful for ants- but I am grateful for the reminder of God's love for me that they provided. 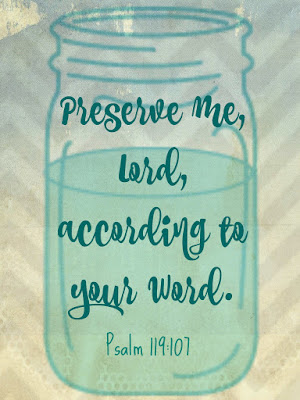