Eleven months have flown by! Mom and Dad keep saying that anyway. This is the oldest I've ever been, and I still don't know how to tell time, but 11 months seems right to me. I feel very "11 months old."

I am learning to stand on my own. I still prefer to hold on to the furniture and walk around the living room. The furniture is set up neat so I can pretty much get anywhere I want to go by walking nd holding on. Standing by myself is kinda scary. I actually only do it if I don't realize that's what I'm doing, like if Mom and Dad give me a toy to hold, I'll hold it and stand there not holding onto anything. But the second I notice that's what I'm doing, I plop to the ground. Except one time I was feeling particularly brave and- get this! I took a step! All on my own!  Of course I haven't done it since. It was scary. Mom and Dad sure we're excited about it though :) I'm also starting to figure things out for myself. I have learned that shoes go on my feet. I try to put them on myself, but my coordination skills are lacking.

January was a really interesting month. Mom and Dad got to be home a lot, but not for good reasons. The first week that school started back, the temperature was REALLY cold. Like single digits. School was delayed two hours for the first three days. We all got to sleep in, but it didn't help much. It was still way too cold to be out. The wind hurt my cheeks. Mom bundled me up really warm, though. 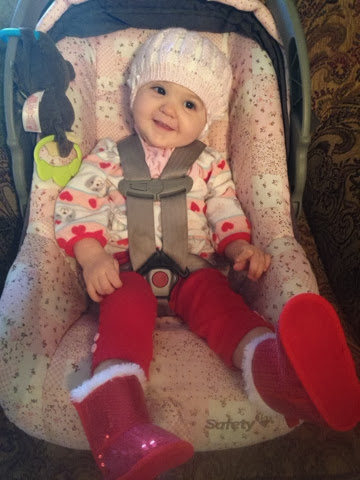 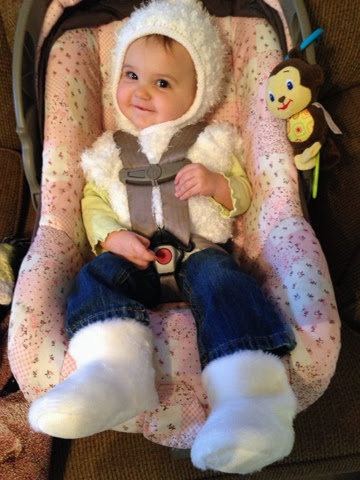 The next week, Mom called my babysitter on that Friday with some scary news: a man had called in a bomb threat at my parents' school! They were evacuated and safe, but didn't know when they'd be able to leave to come get me. I wasn't scared though. I was playing happily with Mrs Scott at her house. They came and picked me I as soon as all the kids were picked up. Update on that: the police caught the guy yesterday!! He is in BIG trouble now!!

Two weeks after that, something strange happened. White, cold, fluffy stuff started falling out of the sky. It fell really fast and thick and covered everything, turning it white. Mrs Scott called it "snow." Sure enough, Mom and Dad picked me up early that day, too. Their school let out at 10:30. Our normally ten minute long drive home turned into over an hour because of the bad snow making cars stop and slide and hurt each other. I did not like it at all. I cried to get out of the car, but eventually decided just to go to sleep. That made it easier on everybody.

Once we got home, I realized that snow is actually not scary at all. It's AWESOME!!  You can squish it and crawl around in it, and it sticks to you. You can even make  it into a ball and throw it like Dad did to Mom. She was not nearly as impressed with that part.

There was so much snow that they got to stay home with me the whole rest of the week! We had so much fun!

That Friday my Paigey came down to visit. She made delicious cookies! I always love getting to see her when she comes down. We played a bouncy game that my mom used to play with her grandmother. I loved the part at the end when I'd "fall" off the horse. I couldn't wait for it, so I would just fling myself backwards early.

Last Sunday was my great-grandmother's 74th birthday. We had fun celebrating with her. I even got to try a birthday cupcake! 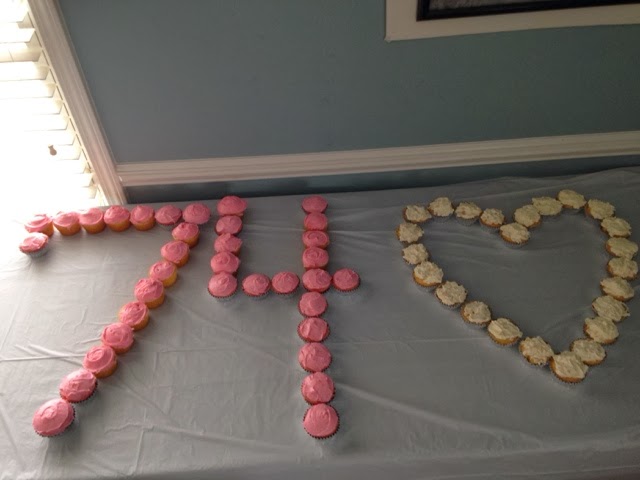 And speaking of birthdays... Guess who has a birthday coming up!! ME!!!!! I'm one month away from being ONE YEAR OLD!! Mom has been busy planning and making all kinds of decorations. You'll have to wait til next month to see everything when I have my big One Year post. I don't want to ruin the surprise!

Until then,
Parker E. Poe